As I promised in an earlier post I will show some more pictures of the Thousand Sons project I am working on on and off. In the previous post I showed my finished Ahriman model and the Terminators and Dreadnought I have made.

A Thousand Sons force is driven by sorcerers off course and I have aquired some to lead the squads of Rubrics or act as stand alone models. I have the three older metal sorcerers made by Games Workshop. These are great models by themselves and I will not convert them in any way. When I was planning the various elements of this force the Wrath of Magnus book had not been released yet, so I used the older Chaos Space Marines codex. In it it says that sorceres can bring familiars with them. A quick rummage through the boxes of miniatures I collected through the years brought me some old fantasy familiar models which would be perfect.

There is also the sorcerer model which came with the Thousand Sons upgrade kit GW made before they released the new Rubric box. I have 2 of those. One will not be converted, the other has had some work done to it. I liked the idea that it would use a flying disc deamon as a mount. I drilled a hole in the botom of the model so that it would fit over one of the spines of the beast. I also changed the model itself a bit. I did a simple head swap for one of the heads I had left of the Exclusive Wargames upgrade kit and I changed his power sword for a spear. The spear itself is made form a banner pole with a power sword blade attached to it. Perhaps I will also fit the sheathed sword on his belt. The third picture shows the original model next to the converted one. 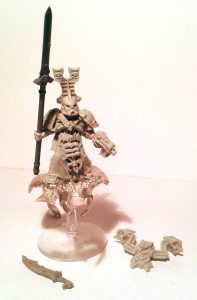 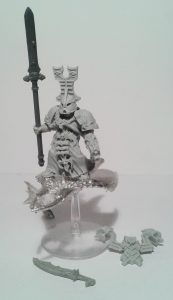 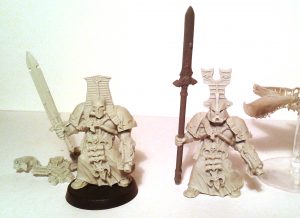 In all my years of collecting I had also bought a greater deamon of Tzeentch at some point. So when I started the Thousand Sons project I felt I had to include this model as well. Perhaps it might not even once be used in the army, but it will look great when displayed with the rest. 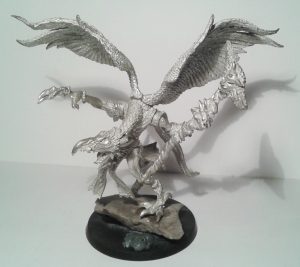 The majority of the army should be Rubric Marines. As stated before, I started this collection before the new Thousand Sons models were released. So I began with 2 boxes of Chaos Marines and added the Thousand Sons upgrade kits form Games Workshop and Exclusive Miniatures. Together with the Stygian shoulder pads kit from Kromlech www.bitsofwar.com they will make about 2 squads of Rubric Marines with enough variation between models to be intersting to look at. I have just started to build these, but I did sorted all the various pieces. 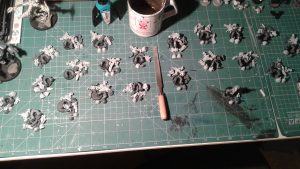 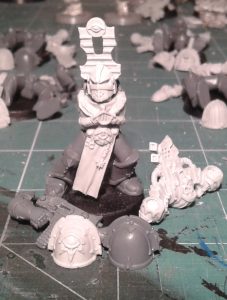 To make painting easier I will not attach their arms and backpacks yet. In that way I can better reach the nice details on their torsos.

As a final addition I wanted a big tank. A Landraider would do the trick. And it can transport models if I will bring this army to the table in the future. To make the standard model a bit more attractive I bought the Thousand Sons doors from Forgeworld. 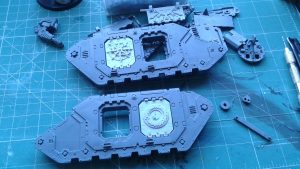 Together with some other bits and pieces I found on the Chaos sprues here and there the tank will fit in well. I want to try to hinge all the doors so you can get a nice view of the interior. Therefore I painted these parts before I will glue the whole thing together. (It is a work in progress, not the finished result yet). 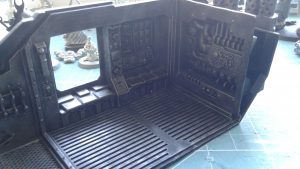 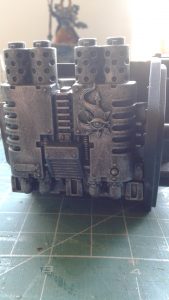 As you can see I still have lots of work to do before I can even begin painting. And since I have several different projects I want to work on I have no idea when they will be finished, but I will write new posts whenever I advance a bit more. One day these sorcerers will be marching on a gaming table. And probably will be wiped out to a man considering my history of gaming. I just hope they will look cool before they die.