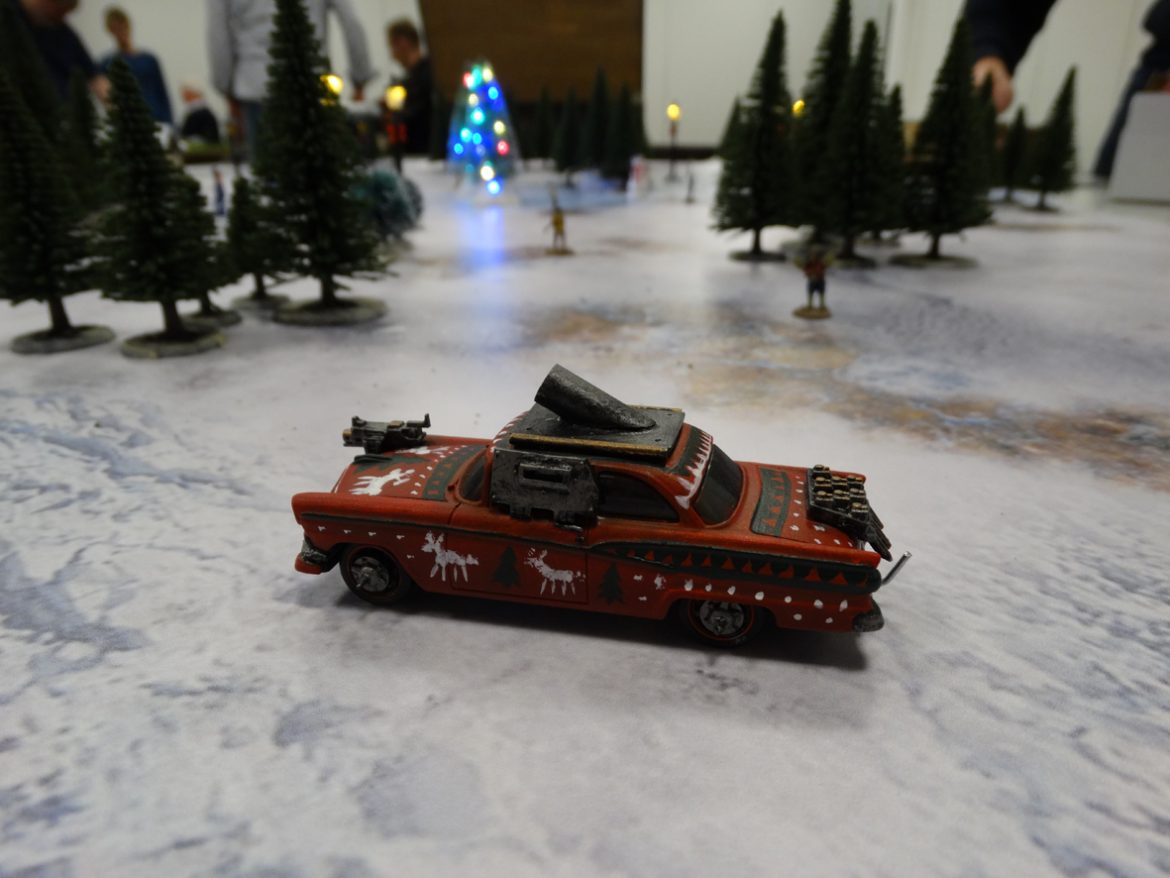 A few weeks ago the traditional annual X-mas battle was played at our local gaming club. This year it would be a Gaslands game filled with snow, festive mayhem and gasoline driven monsters with bells on. My good friend Matthijs created the customized rules, scenario, X-mas tokens and a lot of merry scenery for this occasion and he went all out on it.
When it became clear what we would be playing this year we (the players) had to start building and painting our Gaslands X-mas vehicle. I found a few cheap Mattel cars and started converting one. We were told that we would have a confetti-mortar and a forward facing snowball canon. And the car would need a towbar for we would be hauling sleds during the game. A few things from the bits box and some scratch building later I was ready to start painting. To stay true to the X-mas theme I decided to paint it as a X-mas sweater. Those dreadful things they even make in Star Wars patterns. Loathsome and ugly things and somehow during the festive season everybody seems to be wearing them as if they are the coolest items on the planet. (But being a downright Gringe might paint my opinion a bit). 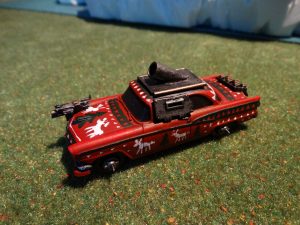 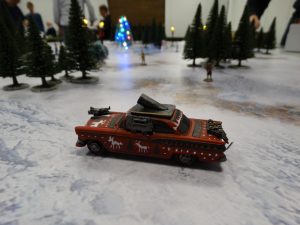 Matthijs had ordered a new snow mat just for the occasion through a local printing webshop. I made the design for it and it turned out nicely I must say. The table soon filled up with pine trees (some of them with lights), houses, lamp posts (also with lights in them), snowmen and last but not least… zombies! 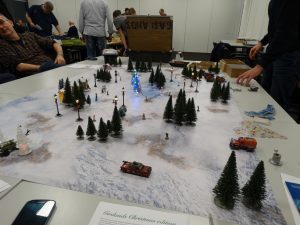 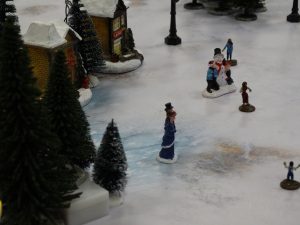 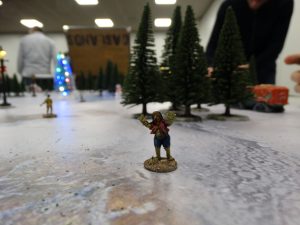 There were custom made dashboards on which normal Gasland terminology was replaced with appropriate festive names, custom snow themed movement templates, confetti templates, special dice and wooden tokens in the shape of christmas trees and reindeer. 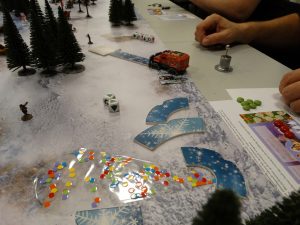 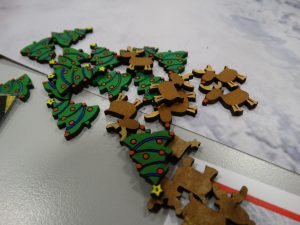 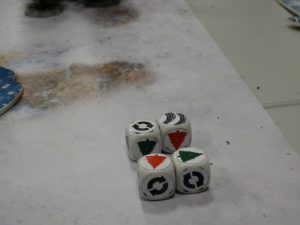 And on top of that Matthijs also had ordered “some” laser cut sleds which could be towed behind the cars. 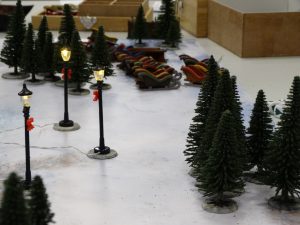 To all this madness we added our X-mas vehicles. (I did not take a picture of all of them, but there were about six cars racing around.) 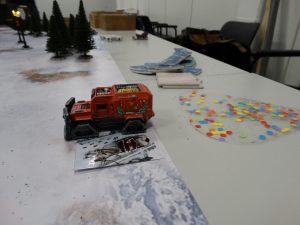 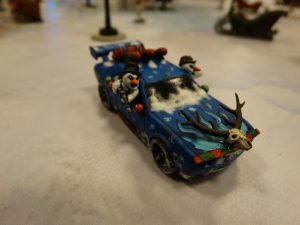 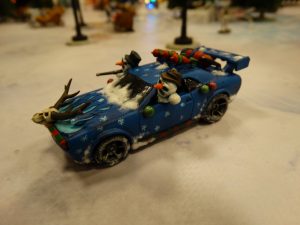 The game itself then. We used stripped down and altered Gaslands rules. This meant no gear shifting and all that, less movement templates and special rules to invoke the christmas spirit. Since we were driving on snow and ice every movement had an automatic slide to it which could only be negated by rolling enough green christmas trees on the dice. Mind you, these dice could also provide you with more slides and rotations and red trees. All of them designed to let your car slip ’n slide all over the board and provide you with more and more ‘X-mas Spirit’ (bad stuff). Once you had gathered too much X-mas Spirit your car would loose all it’s sleds and you had to place it back at it’s starting point all the while singing a christmas song.
On top of that we could use confetti mortars, snowball canons and firecrackers to damage our opponents. Oh yes, did I mention the zombies yet? Snowball throwing zombies that is.
The goal of this game would be to retrieve the Golden Sled, one of Santa’s many drone-sleds that had crashed in this cold wilderness and were just waiting to be picked up by some scavenging madmen (once a car would pass over a sled in the movement phase it would automatically be placed behind the car). Every sled had a specific color and once a driver would have gathered 4 different colored sleds the Golden One would appear on the table. The winner would be the one who would successfully bring this Golden Sled back to his starting point. Pretty straightforward right?

It was to become a very hectic and chaotic game, more fun driven then rule driven and the game mechanics would be bend and broken to keep the game going and to make sure nobody would gain to much of a lead. Almost all drivers had the Golden Sled behind their car at one point during the game and all of us made good use of our confetti mortars and other ballistic fun whenever we could. (If something is within range you just shoot it.) 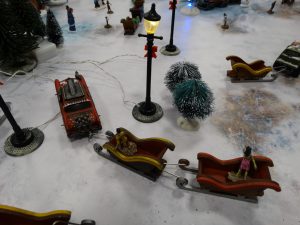 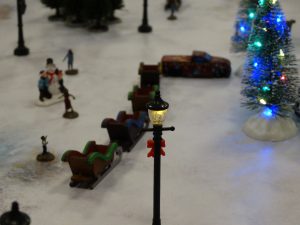 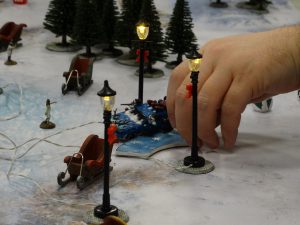 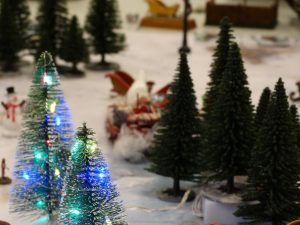 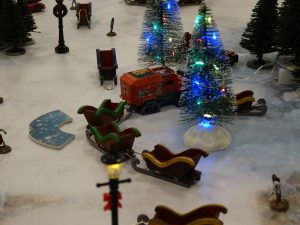 I also had my 1-minute-of-fame with the game winning sled attached to my car. 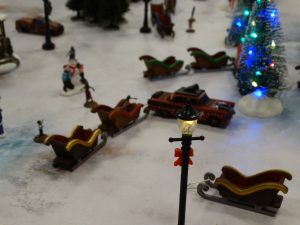 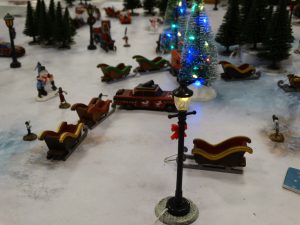 But the one sure thing about having the Golden One was that all guns would be trained on your car and all the other nasty things other players could come up with would be thrown your way. So after a short run (but what a glorious few inches it where) my car had gathered too much X-mas Spirit and I had to start all over again. 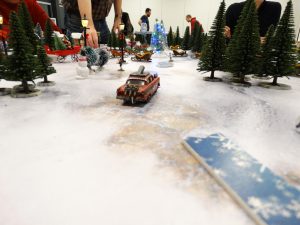 Meanwhile other drivers were fighting over the sled or crashed their vehicles against trees or lanterns (repeatedly). 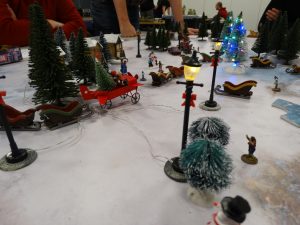 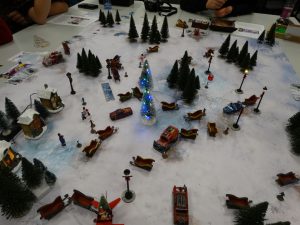 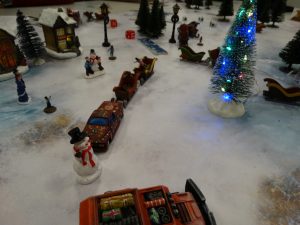 In the end Rob would be the victor and was rewarded with the Gaslands X-mas Trophy. 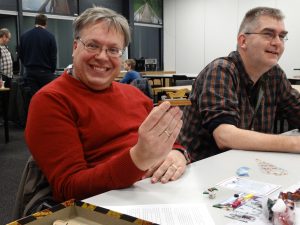 Mind you, to all people attending Poldercon in a few weeks; Matthijs will be running this scenario there, using the festive cars we all created. If you want to wipe the smug smile of Rob’s face you can participate in the game and steal away his Trophy.