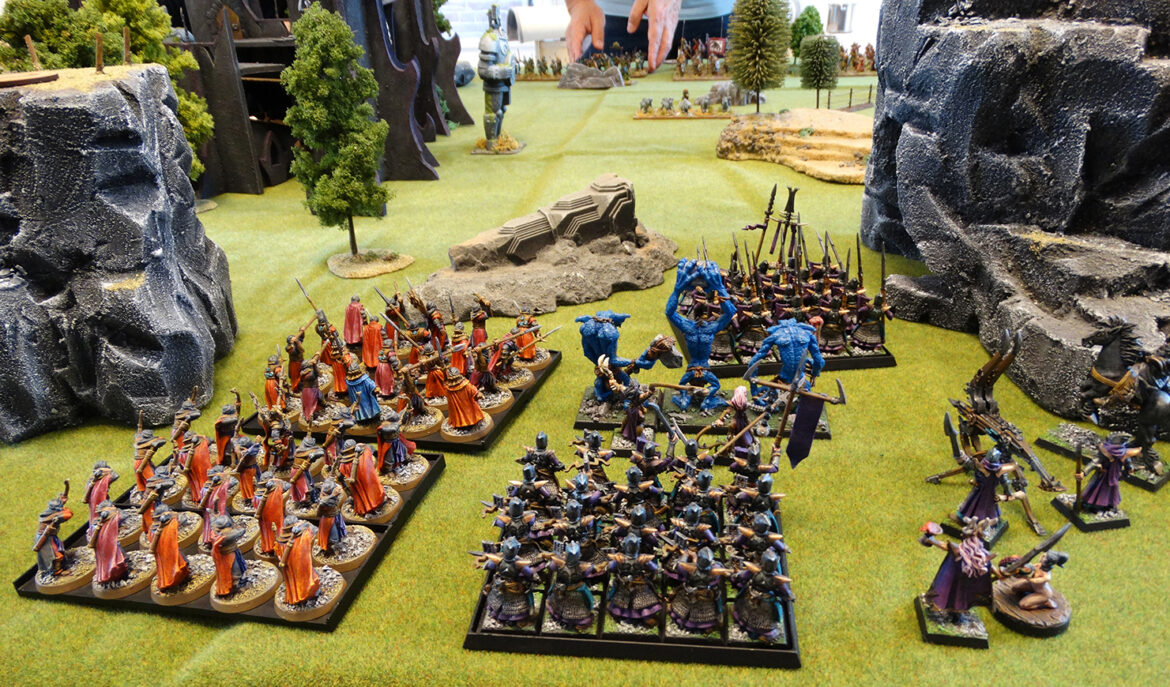 This weekend we had a fun game of Oathmark with 6 players. Since Jan-Willem and me had to decide we would not be attending the British Oathmark day, we wanted to do something else. Initially we scheduled to play a large game at a game fair, but that was cancelled (we all know the reason for cancelling shows and such by now), so we arranged for a suitable place to play the game ourselves.

The scenario would be an all out war for a sacred stone artefact (who knows what powers said stone possessed, but we all wanted it badly so it seems). The artefact was located in a ruined castle which was surrounded by 6 Oathmark statues that magically sealed all the entrances. And as we all know such measures always prove to be fairly inadequate, there was a mechanical dragon to guard the stone as well.

We had 6 players who each brought 2000 points armies.
I brought my Dark Elves and Humans with some Trolls to back them up.
There was a force of Human mounted knights with some Elven archers, Orc line breakers and Dwarven warriors.
Another Elven host showed up. Those were of the woodland type and they brought some humans along as cannon fodder.
Next came a stalwart Dwarven force.
Smelling an upcoming battle, a rabble of Orcs and Goblins found their way to the battlefield.
And a couple of Necromancers decided to resurrect some Undead to throw into the teeth of battle.

All armies were randomly deployed on the table and initiative was also randomly determined for each round. Each initiative round we threw dice to see if any strange event would come up (which eventually occurred only once and actually had no consequence for the game).

In order to win the game a player had to carry the stone artefact to a table edge. Since the artefact was located in the castle, a unit or character had to enter the castle, pick up the stone item and carry it off. This sounds rather simple a task, but proved to be a lot more difficult in reality. The six Oathmark statues had to be destroyed before models could enter the castle itself. Destroying an Oathmark was not difficult (a unit or model had to come into base contact and use an action to destroy it), but as soon as the last Oathmark fell, the fearsome dragon would come to live to protect the artefact.

And on top of that there were 5 opponents to deal with. Deals were struck, bargains were made and backstabbing was imminent.

The game started with the Orcs having first initiative. And as is typical for these green skinned lunatics they immediately catapulted a huge chunk of rock into the Undead host, completely forgetting all about the scenario.

As you all can guess the Necromancers were not too pleased with this because they lost a fair amount of skeletal warriors and launched some counter attacks. Meanwhile, the Dwarves also targeted the Orcish host in traditional fashion. Which meant that the three armies on my left side were pretty much occupied by battling each other and sending off some units to destroy the Oathmarks they could easily reach.

My Dark Elven host was deployed in between two large pieces of rock, completely sealing them off from the armies next to them. This proved to be a very positive starting point because they were pretty much left alone for most of the game. The Undead on my left were happily slaughtering Orcs and Goblins and the Human mounted knights and their friends on my right started to veer off in the direction of the Wood Elves on my opposite.

Not only that, the hills also proved to be a perfect natural shield on both my flanks.
So, as my opponents started to advance on each other, loosing some volleys of arrows and artillery barrages to boot, I had lots of time to get my spell caster to cast the spells needed to buff my shooty units while the army advanced forwards towards some Oathmarks and the castle.

The advancing part of this plan was executed to perfection. My sorceress on the other hand had some trouble casting spells (or getting activated at all, which is a feat on itself as Elves need only a 3 on a 2D10 to activate). It took her four turns to actually cast two spells. I blame her new fruit bearing slave. She must have been a real distraction…

On the left side of the table the battle was still dominated by the Undead and Dwarven forces pounding the Greenskins into the dust. More and more units of Orcs were driven off the table by failing several morale tests and even a cascading panic that rolled through the army as an unstoppable tsunami.

And while the Orcs and Goblins were dying in droves (It is fair to mention here that a Goblin Spellcaster miraculously survived several Fireballs meant to burn it to a crisp) both the Dwarves and the Undead send out units to destroy some Oathmarks.

The Elven forces on the opposite side of my Dark Elves were busy sending their Human allies off to deal with the Orc Linebreakers and mounted knights heading their way. Some of the Elven archers moved towards the Dwarves on their right to secure that flank and they also advanced on the castle and its Oathmarks. But most sneaky of all (as is typical for these tree hugging pointy eared cousins) a single Elven Hunt Master and its trusted hounds positioned themselves right in front of an entrance to the castle.

My Human spearman destroyed an Oathmark while still more Orcs died on the other side of the table. This made their situation rather hopeless. But Jan-Willem had anticipated for such an event and made a sealed envelope with a Deus Ex Machina in it. A player was allowed to open this when the situation became hopeless (and pizza had not been brought by that time).

This was a perfect time to open the envelope. All of a sudden a blue Telephone Box appeared in the midst of the Greenskins leftovers. The letter in the envelope revealed several options that the player could choose from to keep the game interesting to play (instead of being reduced to a mere spectator for the rest of the day) and each player could invoke one of these options in case their situation became hopeless as well.

Apparently some wibbly-wobbly-timey-wimey things were triggered because the reminder of the Orc army was shrouded in a strange haze and re-appeared in full force, exactly as it was when they first marched onto the field several hours before! Time was reversed, but only on that part of the table.

Being Orcs and Goblins, they happily started the battle all over again by repeating the same tactics they had before which meant that soon enough they were back at battling Undead and Dwarves again.

The rotund downsized bearded blokes had not been idle by the way. They positioned themselves near a castle entrance and also destroyed the final Oathmark.

As soon as the magical barrier of the castle fizzed and crackled and disappeared with a very uncharacteristic plopping sound the mechanical dragon awoke. It spread its metal wings, shook off thick layers of dust and cast about to find the nearest threat to the artifact it guarded.

As it happened I had managed to position my mounted champion near an entrance, facing the prize. Which meant that the dragon could choose from three threats. My champion, a Dwarf unit and the Elf Hunt Master with its dogs.
Being the lucky guy I am it appeared that my champion was closest to the artifact. The dragon was conveniently placed on a tower right above my brave champion and could unleash a devastation cone of fire from its maw right on top of my Elf. Now, this is the part were it all becomes a bit unreal and many a tall tale will be told in the years to come about this confrontation…
You see, my champion not only survives this blast of hellish flames, but also manages to actually severely wound the dragon in the close combat that follows (before being utterly smashed and end up as a bloody smear on the castle walls). This true champion would prove to be the only casualty my army would take this day, but what a mighty fine lad it was before he died horribly.

I hope you have not forgotten about these sneaky wood elves. Because while my champion was heroically distracting the dragon, the Hunt Master made a mad dash into the castle proper and grabbed the artifact (I told you they are a treacherous bunch).

At this point time was running out for us to complete this game and while the Undead forces also engaged the dragon (from a safe distance with spells) several forces were now frantically maneuvering themselves into position to catch the dogs if they would emerge from the castle with the artifact.

In the end the dragon was able to retrieve the artifact before it left the castle and lots of casualties could be mourned when we had to quit the game. The battered armies had given their best, but to no avail. The prize is still in the castle, safely guarded by the dragon which was wounded, but pretty much alive to fight another day. And as the commanders sound the retreat and return home with the leftovers of their once mighty forces, new oaths are made. The treachery of many an opponent on this day will not be forgotten…