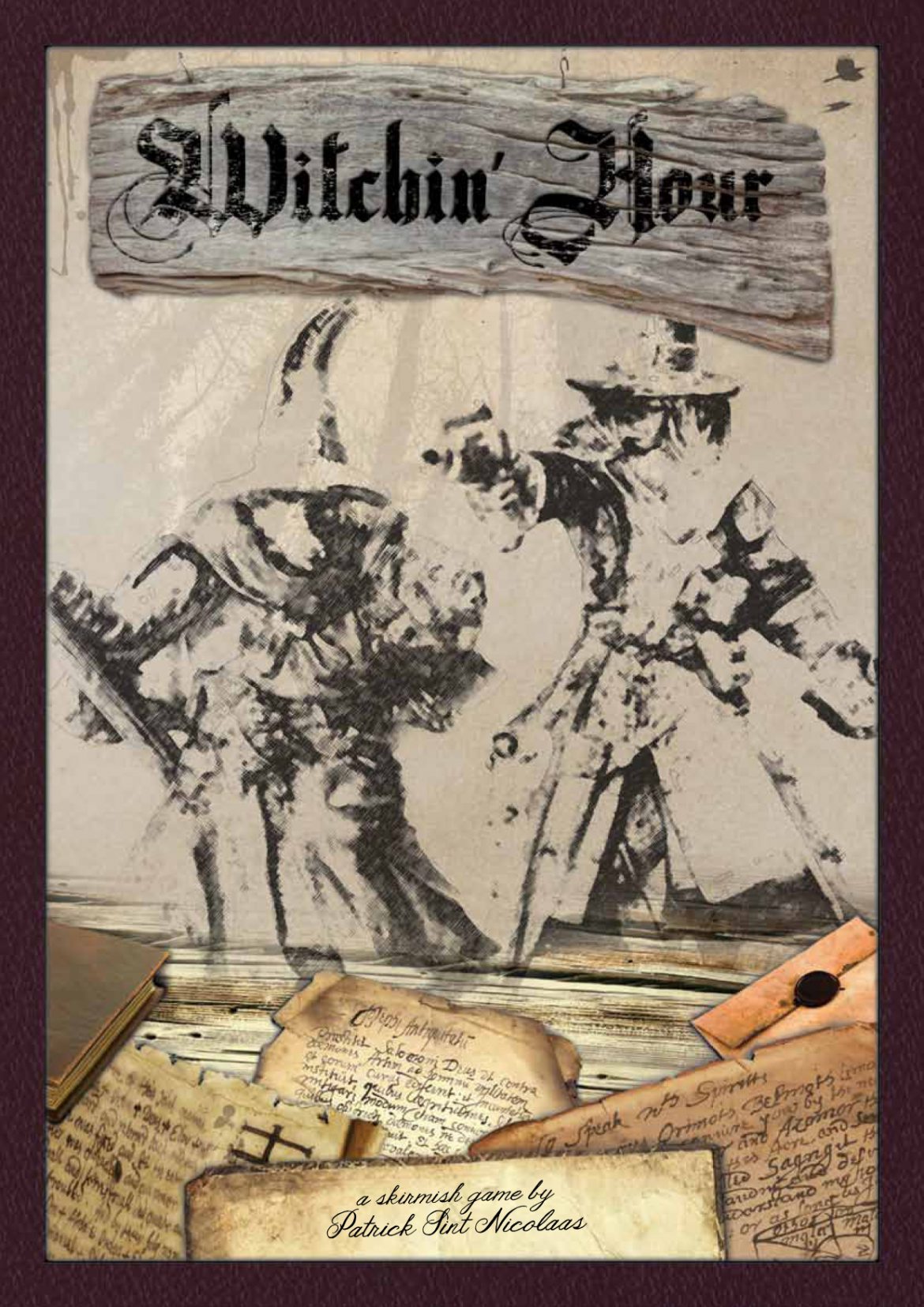 Including the first test run of the first scenario.

The Witchin’ Hour ruleset is well underway now. Each playtest reveals more about how the game mechanics actually work (or not) and only minor revisions are made.
I have also written the first scenario for the rulebook. I intend to write several scenarios that together form a narrative campaign of sorts.
It tells the story of a witch hunter and his henchmen who are sent to the town of Fairhaven to investigate a report on witch activities.

Yesterday I invited some friends to play some more test games at the BOD club.
Hamza and Marcel were the first to arrive and wanted to try the new scenario. Rob and I made 65 points lists and played a ‘pitched battle’.

Rob chose to play witches, mainly because he brought along some of his vampire models that he had not used for a long time. The vampires would serve as his witches and he chose some skills and spells that he found fitting for vampires, thus showing the flexibility of the rules. Some zombie models represented a cultist leader and cultists.
I fielded a witch hunter and some mercenaries, one with a pair of hunting dogs.

Rob had not played the game before, but as I had instructed all test players to try and break the game he did his best to accomplish this. And succeeded, I must add.
Not only did he constructed a list that gave him a lot of activation tokes, he also sort of ignored using spells. His witches only had a minimum of spells, but a lot of skills for close combat.
During the deployment phase he could place his deployment token almost next to mine because of his staggering amount of activation tokens.

I had first initiative, but with a lot less activation tokens. So I could maneuver about for a bit, getting a mercenary and his hunting dogs in close combat and loose two arrows, but that was about it. Rob just had to wait for my tokens to run out so that he could use his tokens to wreak havoc on my troops.
This resulted in the dead of some mercenaries and the dogs, but they had also managed to deplete almost all of Rob’s spells. This, so I thought, was not bad at all. But I had not counted on the fact that his witches were more than a match for all my models in close combat. He could easily outnumber my models and utterly destroy them one by one.

A very short game was the result. We had fun, so no problems there, and since I am still learning from each game played I immediately started thinking of how to counter this way of play. Luckily it appeared that only small revisions would be needed.

Meanwhile Hamza and Marcel were testing the first scenario.

The first scenario is based on gathering information and trying to avoid combat. The witch hunter’s apprentice has been sent ahead with some mercenaries to talk to the locals and gather information. The supreme witch has foreseen his arrival and has cast a spell that covers the town in an obscuring mist. Cultists are sent into the streets to bully the townsfolk to make sure they do not reveal any information to the apprentice.

The mist obscures vision, so both parties will remain hidden from each other if they keep at a safe distance. The townsfolk move at random and it becomes a hide and seek game where you try to avoid the enemy, but engage the townsfolk models.

Each time a townsfolk model comes in base contact with a player’s model you have to throw a dice. If the score is high enough you have gained some information (for the witch hunter player) or scared him off (for the witch player).

After a certain amount of rounds the mist clears and ranged weapons can be used. The way models can react to the actions of enemy models als becomes easier for they now have line of sight all of a sudden. This changes the way of play drastically at the end of the game.

Victory points can be obtained by the amount of townsfolk models successfully engaged, killed opponents and captured enemy models. When you play the scenario’s in succession you can also get some advantages for the next game to be played.

Both Hamza and Marcel enjoyed the game. There are some special rules that need to be more clearly written and we decided that some victory conditions needed to be changed, but all in all they claimed it was a nice scenario to play. We had some discussion on how the townsfolk moved randomly and when. The way I have written these rules might not be the most obvious way of doing this, but offer a unique and dynamic game (we concluded).

A very productive evening for me, giving me more information on how the game works and some vital changes to the rules can be made to both general rules and scenario. I will incorporate these changes soon and start writing the second scenario.

The witch must burn!