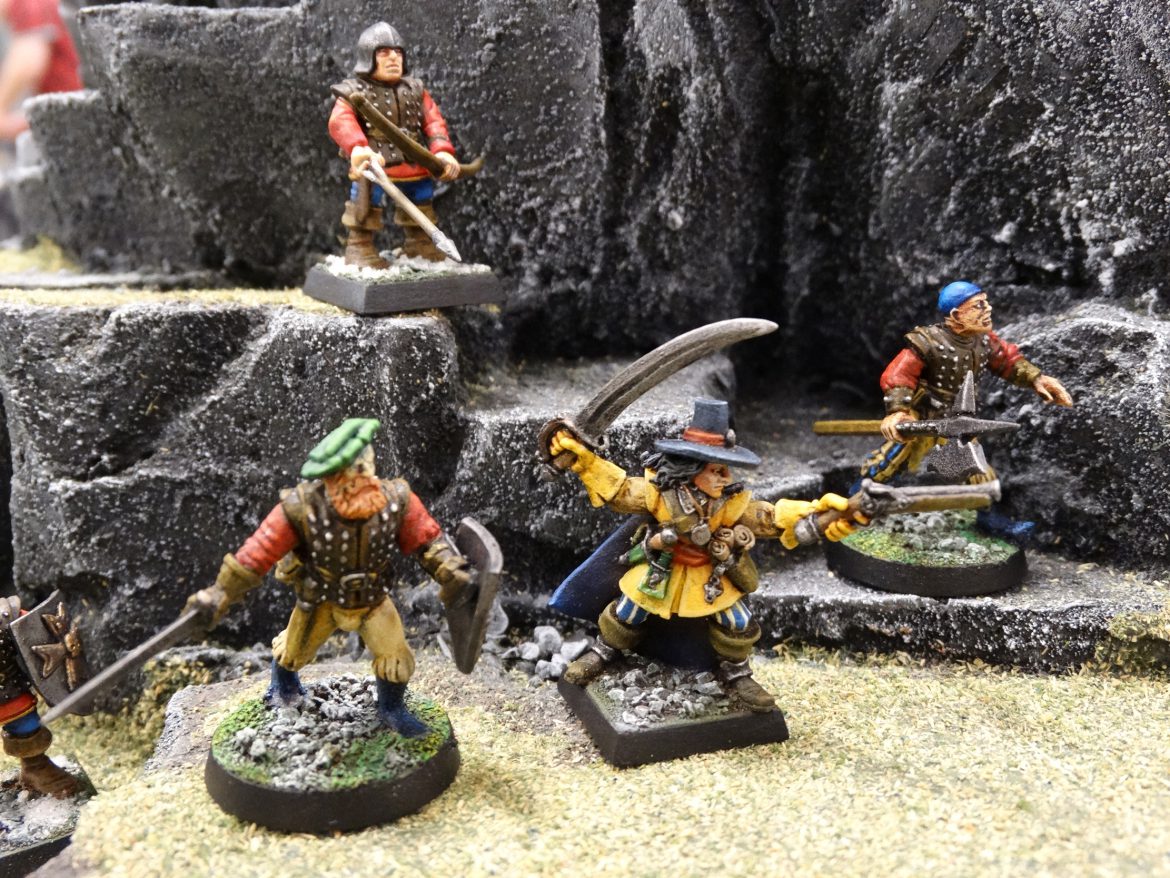 The first post about the skirmish game I am creating.

It is official! I have created my own rule system for a skirmish game. Or at least, I have made a very good start. The basic rules are fleshed out and now in the stage of play testing. This in turn will result in fine-tuning and/or completing certain aspects or perhaps even some re-writing of certain rules. Once this is done I will start on some scenario’s and a campaign system to complete the rulebook. In the end I want to make the rulebook available either through Kickstarter or some other form of self publication.

So, what is this ruleset all about you ask? Well, I based this skirmish game around witches and witch hunters. Witch hunters and their henchmen will seek to rid the world of the foul witches and their covens. The witches in turn are keen on destroying these meddling do-gooders and just want to get on with corrupting the world.

I wanted this ruleset to encompass more than just medieval/fantasy witch hunters and their prey so I created a way to gather warbands based on what-you-see-is-what-you-get on the miniatures in your collection. For instance, a basic witch hunter costs a certain amount of points to begin with. Next, you can equip him with a variety of armor and weapons (all of these at a certain points cost). You just pick the weapons and such as you can see on the model you want to use. All this equipment is easily converted to an alternative setting (sci-fi for instance), since the rules for a flintlock pistol are the same as for a laser pistol. Range and damage effects remain the same.

I also wanted to try to get some alternative rule mechanics in this game to make it stand out from other games. In order to do that I have created a more evocative way to deploy your models. I did not want players to just put their models on their side of the table, but instead opted for mobile deployment zones. These zones will move about the table at the behest of the players and players can react to each others zone movements.
I also made alternative rules for the activation of models. Yes, a player with initiative can activate all his models in his turn, but the other player can react to this by disrupting these activations in two different ways. All these activations are based on the amount of tokens you have available for this round.
Close combat is also in a somewhat alternative style of play. Each model has a number of combat dice per round which are used for attack and defense. You can run out of dice pretty quick if you are not careful.

Of course there are lots of spells for your witches to hurl at their opponents and both sides have lots of potions/poisons and amulets/magic items to their disposal. Together with the skills you can attribute to models you can imagine the variety of models you can use and flavor you can put into your warbands.

Now, with the basic rules all written down it was time for some play testing. We all know that writing the rules is one thing, but the way they work (or not) should always be tested. For the first test game I invited my friend Jan-Willem over. He has been very helpful during the early stages of the development of this ruleset. He has a vast knowledge of a lot of rulesets (he sort of collects them, silly man) and was kind enough to listen to my initial thoughts and ideas. His insights and ideas helped me to form the first incarnation of the rules.

We just sat down and started to select models from our collections and create warbands for a certain amount of points. We immediately encountered some errors here and there, so right from the start we knew this was going to be a productive evening.

During the game itself we also became aware of some basic rules that did not work as well as we had thought, but these were quickly re-written or altered. We did not even finish the game, but that hardly mattered. The most important thing was to test the rules and to see if they worked in a fun way.
We both agreed that the basic rules as I had written down were fun to play with and only needed some revising here and there.

Now, with the knowledge that the basic ideas of the rules worked, I was confident that this set would have potential. Having made notes of the improvements we came up with it was time for some more testing.
At one of our club nights two friends agreed to play a game against each other with me as a referee/guide.

I instructed both Arjan and Hamza to create warbands using the rules and models I provided them with. I had already set up a nice looking table for them.

Arjan was very keen on using the witches and their cultists since he had read the spells and poisons I had created. He came up with a list of witches with lots of spells and only a few cultists to back them up.
Hamza on the other hand created a stalwart witch hunter with a retinue of mercenaries to harass the witches with. They carried a plethora of weaponry, including two archers.

Both players were very pleased with the way of deployment (once they got the general idea of the rules). As Arjan commented: deployment is now already a part of the game were you try to anticipate your opponents moves instead of just dumping your models at a table edge. It gives you a way of trying to maneuver your models to the right spot and gain some benefits from that final deployment spot. You can even imagine a narrative during this.

During the first round I had to elaborate somewhat on the way the activation and counter-activation of models works, but both of them quickly caught up to this way of playing and pretty soon tactical decisions were constantly made; shall I use activation tokens now to do some counter reactions or even pre-emptive measurements to what I think my opponent will do or wait to see what happens and use my tokens to activate my own models? Or just wait and see what happens and use my tokens for a ‘last resort’ action if needed?
For me as the designer of these rules, it was fascinating to see that my intentions with writing these rules came through. I wanted players to have several ways of having to make tactical decisions with the limited amount of activation tokens they can spend each round and now I could see it working as I had plannend.

During this game I made several more notes, but these were all minor improvements or corrections. It seems that the general rules work and all I have to do is come up with more entries for spells, skills, potions etc.
Once this is done I will make a new beta version pdf and send it to the people who like to play test them. (If you are interested in play testing these rules please write me at: sintnicolaaspatrick@gmail.com).

After some more play testing I will finalize the basic rules and then start working on the scenario’s and campaign system. It might still be a long road ahead, but I am pretty exited about this project so far and very much like to see these rules as a final product for people to enjoy. To be continued!