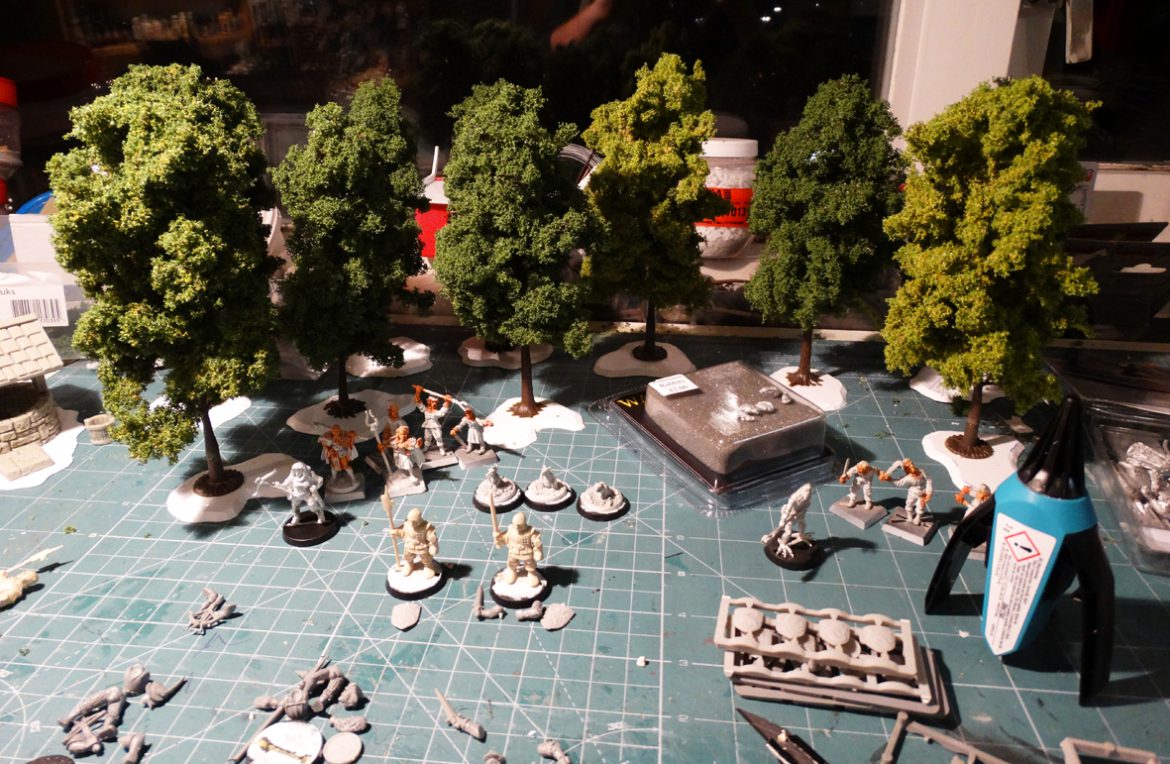 Progress on the Witchin’ Hour game I am developing.

Now that my own game of Witchin’ Hour is well and good underway in its development I thought it would be fun to give you all a glimpse of the amount of work this project has been so far.

When I first started with this concept (months ago) I knew I wanted to make a demo table to show people how the game is played. This has to become a nice looking table of course and filled with beautiful models. I started with some soldier-type models, knowing I still had some old Advanced Heroquest miniatures that I could chop up and combine with bits and pieces from old Mordheim sprues.

Last year at Crisis I used my budget to get some more scenery and models for this game. The demo table would at least need a small village and players should see all sort of available troop types from the warband lists on the table. I found enough to keep me busy for a while.

I also needed a big hill that would divide the table in two. I want the table to be able to host two demo games at the same time, one in the village itself and one that will take place in the caves under a big hill. I am still thinking of a way to connect the two games so that one can influence the other. I started by glueing blocks of styrofoam in a rough shape and used a sharp hobby knife to ‘sculpt’ the rockface and carve out the cave system. The hill and most of the buildings and models are still a work in progress, but I am aiming to get the table ready for next years Poldercon (February 2020).

The rulebook itself has also been a very satisfying process. From writing the initial ideas as mere bulletpoints and loose phrases to the stage I am now at; incorporating the various notes and changes made while testing the game and designing the layout.

I have also started with the various pictures I need in the rulebook. These will be general pictures just to spice up the pages and explanatory pictures to go with certain rules. I do not own a professional lighting set, but a bit of improvising will do. I do own a decent camera, so I have been able to create some pretty decent shots. Most of these will have to be re-done for the final version of the book though, since not all miniatures manufacturers give permission to use their models in rulebooks not related to them.

A few weeks ago I placed a large order with various models to make sure I have most (if not all) of the various opties I want to show in the rulebook or on the demo table. These included wolfs, dogs, pack mules, more witches and witch hunters and a host of models to be used as mercenaries or cultists. I am currently assembling the cultists from the Frostgrave range.

Meanwhile I keep playtesting the rules, paint models (also some sci-fi versions), build the hillside and working on all the components for the demo tables. It is a big project, with lots of different aspects, but it challenges all my creativity in a very positive way. I am looking forward to unleash this game on the world!