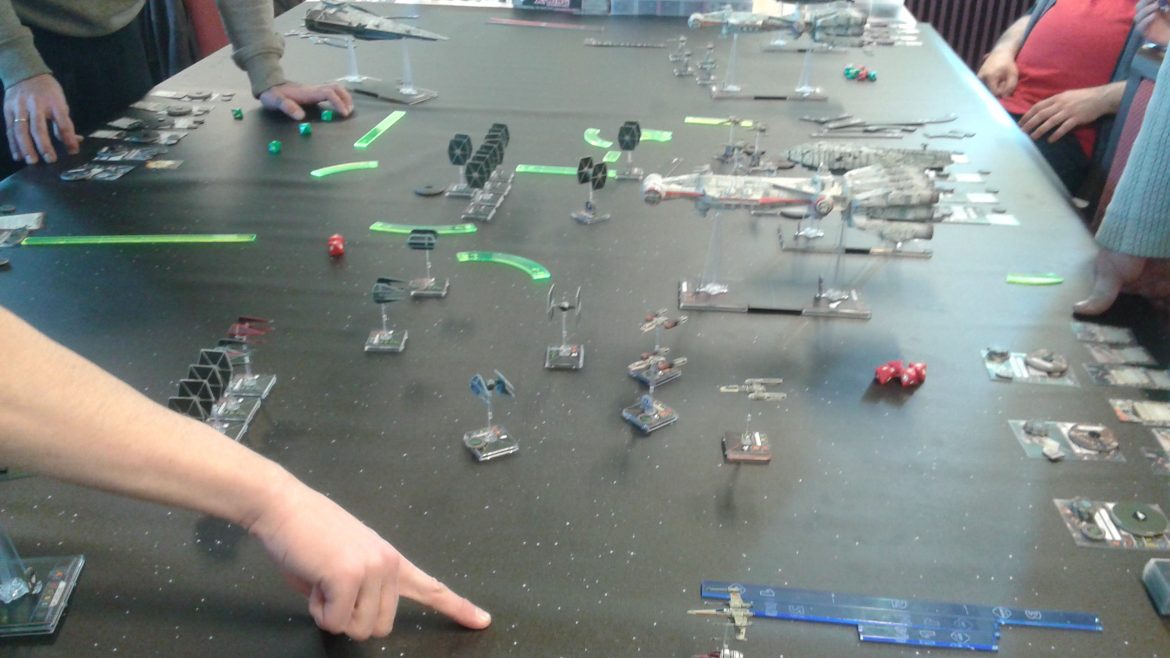 In the last week of januari I hosted a special X-Wing battle. The idea was to have as many ships on the table as possible. I wanted to theme this battle around the first film trilogy, so there was a list of ships that people could bring and ships that were not allowed on the table. I have always liked the look and feel of the ‘old’ trilogy, especially the space battle around the second Death Star. So that was the atmosphere I wanted to create.

I had rented a suitable location and invited people to join. In the end 12 people were to participate and I divided them up in 2 teams. Each team had one player who would control the huge ships (Tantive, Transport and Raider models) and 5 team members who each had control of a squadron of fighters with a total points value of 100 points. 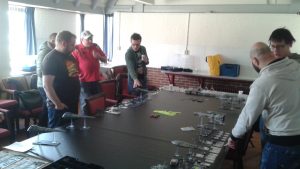 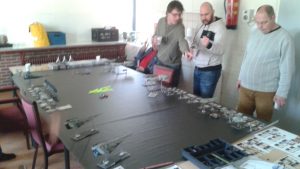 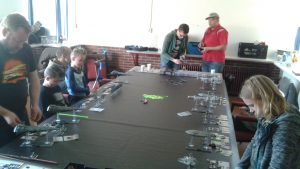 Since the X-Wing game has been designed for two players I was a bit worried that the amount of players would result in slow play, forcing people to have to wait a bit to long before the next action could be taken. The general pace was indeed slowed down, but since all participants had fun, it was not seen as a hindrance. We resorted to call every initiative step out loud, at which point players could move the ships with the corresponding initiative number and take the action they wanted. The same was done during the shooting phase. When ships were obviously not in close vicinity these initiative steps could shift somewhat during the game, but that only helped to quicken the pace a bit. 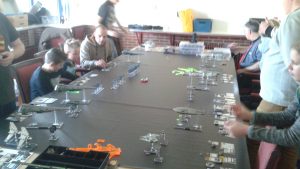 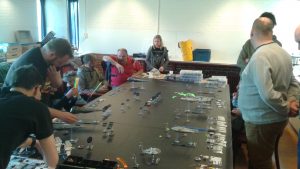 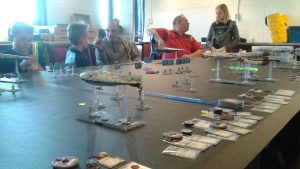 The first movements are done. The soundtracks of the original trilogy playing in the background made the game all the more fun.

As you can see several kids played along. The rules for the X-Wing game are easy to learn, and the way movement is always measured out by using templates makes it an ideal game to play with your kids.

Victory would go to the team with the highest points scored during the battle. By destroying an enemy ship the points for that model including all upgrades were added to the total for the team. 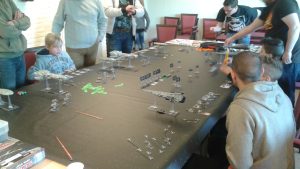 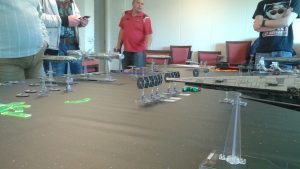 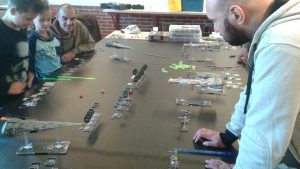 Imperial movement in the sector was closely monitored by the appointed ‘admiral’ of the Rebels. (Sadly the very first ship to be destroyed would be a B-Wing from the before mentioned admiral’s squadron. This caused some sniggering at the Imperial side of the table).

When ships started to get into range the huge ships opened fire with their long range cannons, scoring some first hits. The real battle started when the smaller fighters got into range and also opened fire upon each other. Squadrons would become entangled and the chaos could commence. Close range fire and laughter rang across the table. 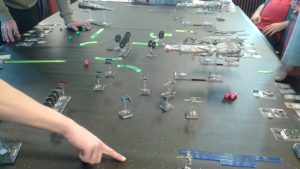 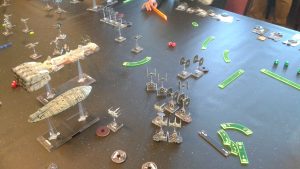 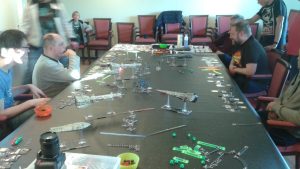 I had divided the teams as equally as I could. The two players who regularly play at tournaments were made ‘admiral of the Rebel fleet’ and ‘Grand Moff of the Imperial fleet’. These veteran players could give advice where it was asked for and tried to come up with an overal battle plan. The attending kids were placed so that both teams would have the same number and other players who I knew were a good match for each other I placed in opposing teams as well. This really helped to keep the game fun and somewhat equally balanced. 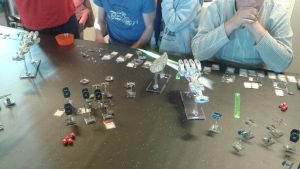 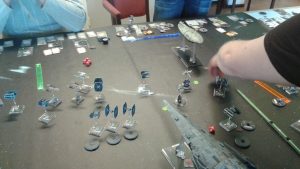 I myself played with the huge Rebel ships. One thing I would not repeat if I was to organise a similar battle. I had 2 Tantive models and 3 Transports to play in my turn. The Imperial player had 3 Raiders to control. This proved to be a bit to much. One huge ship per player is enough, but I was eager to put as much huge ships on the table as we could bring. It was an impressive sight, bit somewhat slow to play. 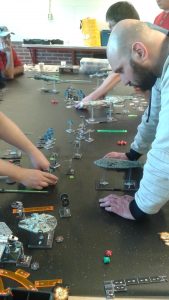 In the end we had to stop the game because time was up. During play there were enough casualties (Millennium Falcon, B-Wings and several X-Wings, lots of TIE Fighters and the front of one of the Raiders for example) to keep things exited. When all the numbers were added up the Imperial team had won the game. But the difference in total scores was not to great which implied that it had been a nice balanced affair.

Thanks to a local gaming store (Subcultures) I could present all players with a special X-Wing card which are given away at tournaments, with the winning team 2 cards per person.

We had great fun (which in my opinion is the most important aspect of playing a game) and I plan to organise another Star Wars games event in the future. I will try to tie three separate games together (X-Wing, Armada and Imperial Assault), where outcomes and actions of one game will affect the other games being played. A certain attack on and around the planet of Scariff comes to mind…..