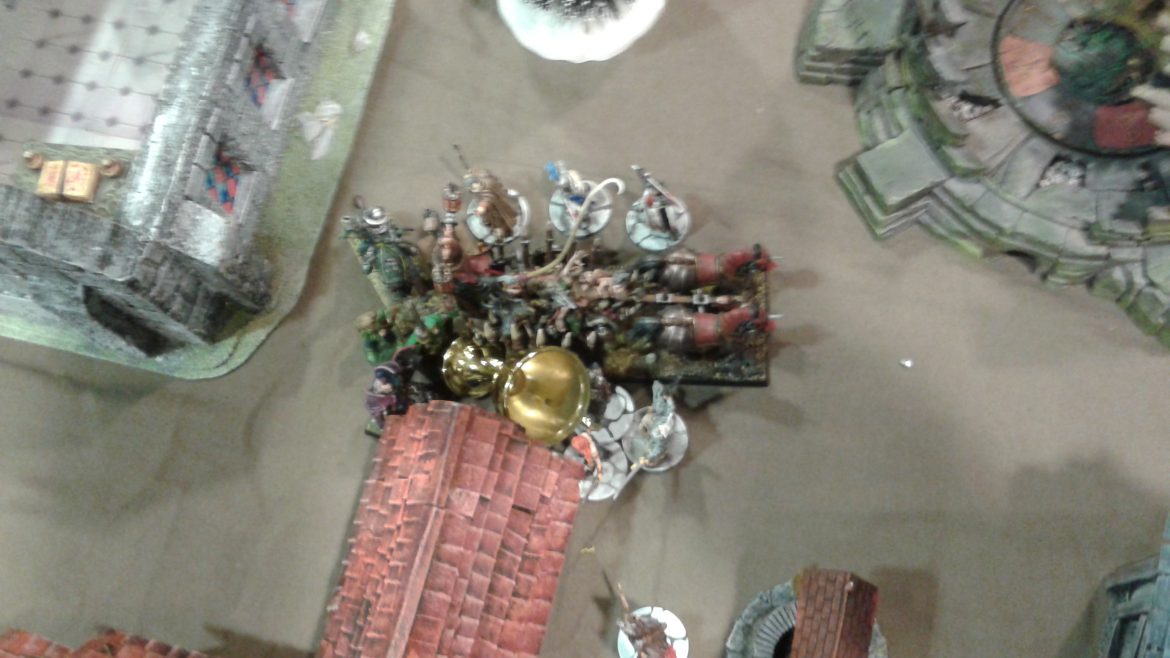 Every year around Christmas there is a traditional X-mass batte at our gaming club. This fine tradition has been held for many a year (many more than I have attended) by one person (Jan-Willem). Since I became a member of the club I have been feasting along with brave men in hilarious games of epic proportions.

This year we played a game using his self created ruleset (PEW-PEW). The setting would be a medieval city were a certain grail was hidden. And since we are all greedy gitz, we were all after this shining golden chalice. All players could bring a small warband of three models. One hero and two henchmen. All could be equipped with either a close combat weapon or a shooting weapon. The PEW-PEW ruleset is a very simplified set which has stats for these two types of weapons. Bows and handguns are basically the same, just as an axe is the same as a sword. Very fast play is the result, which would be all for the best since we were playing with ten people that evening.

Throughout the game each warband had to find 3 clues. Every building could be entered and at a lucky dice roll a clue would be found. Once you had gathered them Jan-Willem had made a nice looking scroll which gave the location of the grail.

Now, there was one small catch… the city was infested by zombies. Each action you performed which was accompanied by noise (i.e. fighting, kicking in a door etc.) would generate a number of zombies close to your location. 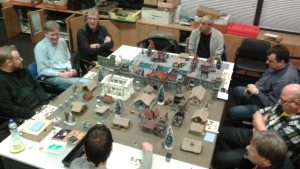 Overview of the playground and some of the participants.

As it would soon turn out, zombies were everywhere. Luckily they were easy to defeat, but greater numbers could be a disadvantage. 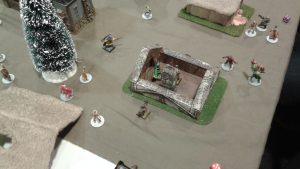 Zombies gather around my fierce warband. 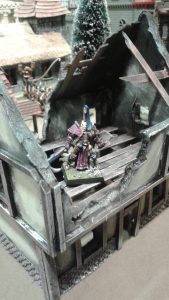 The leader of my warriors, just after he heroically vanquished a couple of zombies in the ruins of this house.

After a while one player was the first to find his three clues. Off course that was when the real chaos started, because everybody else started to follow him in order to find out where the grail was hidden. We all tried to get as close as possible so we could beat the living hell out him and steal the grail for ourselves. This tactic resulted in a very hectic skirmish were one warband would defeat another and get hold of the chalice, to get beaten to a pulp by the next warband and so on. 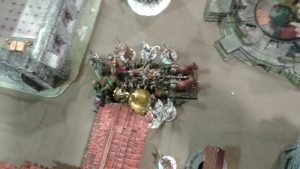 In the end one devious bastard on horseback galloped in at the last moment and snatched the coveted trinket away. He hastened towards a table edge and got away before anybody could respond with a well placed volley of arrows (mainly because most of the warriors were already dead and walking around as zombies themselves).

The idea of these X-mass battles is to have a lot of fun with a big group of people. The games should be simple and fast playing in order to keep everybody occupied and keep one from waiting to long before another action can be taken. All pretense of ‘serious’ gaming and probable storyline are set aside to create a casual atmosphere. These games are just for fun and celebrating the last club-evening of the year. The simple ruleset and fast initiative mechanics ensure there are just enough rules to keep the game going at a fair level.

We had great fun. And all was well.