’t was the time for joy and laughter… tralalalalala. Well, the holidays are over, food was eaten, drinks were passed around and a few games were played. I hope you all have a very nice 2018 filled with hobby and gaming fun.
The last two weeks I have played several games on various levels. And with that I mean that my opponents were of various levels.

The first opponent I faced was my three year old daughter who has been nagging me for some time when she will get to play with Dad’s ‘toy soldiers’. Somewhere along the line I promised her that I would think of a very simple game mechanic just for her. And while I was thinking it would be challenging to come up with an easy way to play a wargame with a three year old the fact of the matter is that it was actually quite simple. I cut two pieces of plasticard of various length for moving and shooting. When firing, a model would hit on a D6 of 3+, or 4+ when the target is somewhat in cover. Close combat is resolved by both players rolling a D6, highest score wins. All models have 2 wounds each and we both had 4 models to play with. In a players turn you first move all the models, then they can shoot and if models are in base contact there would be close combat.
So I simply placed some scenery on the table and we both got some unpainted plastic Necromunda models, placed them at opposite end of the scenery and off we went. 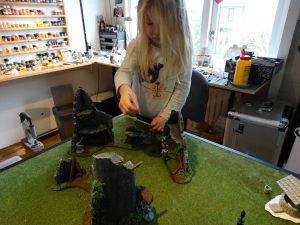 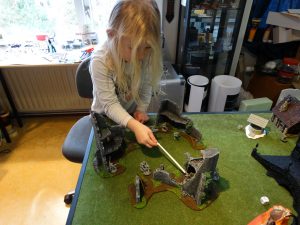 She grasped the game easily enough to my surprise. She had some initial trouble using the measuring rods (namely placing the end of the rod where she wanted a model to end up and then move the model to the beginning of the rod) and we had a lively debate whether a 5 is better/more than a 3, but apart from that it went very well. We both had a lot of fun and I nearly wetted myself when two of her models went in a direction away from the fighting because ‘they went off for a drink’. In all earnest we did not establish a winner, because when she had killed two of my models she just proclaimed that she wanted to go play with her sister and ran off. I guess it was a matter of quitting while you are ahead.
Level of opponent: young novice

I also played a game of X-Wing with my wife. She was protecting a transport with two squadrons of Rebels while I tried to destroy said transport ship with two squadrons of Imperials. Both sides were of equal points, but since I only had to concentrate on destroying the transport ship and she had to neutralize every ship that was able to shoot at the transport, the game was not evenly balanced. I misjudged that part and when I will try the same idea again I wil give the rebel player more control over the transport rather than just flying it without the energy build up. I think it will be much better balanced if the transport is able to use the gained energy by repairing shields and such.
Level of opponent: soldier (footslogger) 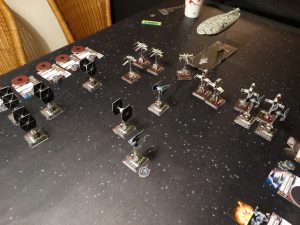 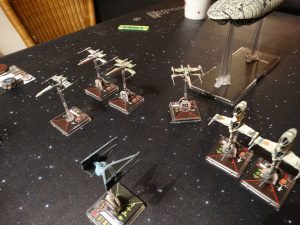 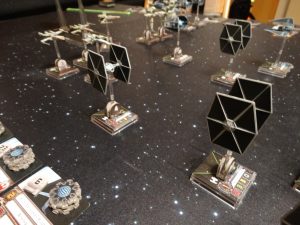 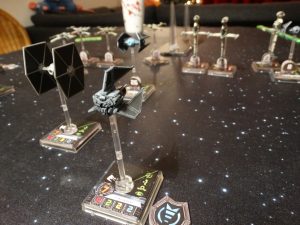 I was also invited by Jan-Willem to play a game of ‘En Garde’. He thought I might enjoy the game mechanics and that I could perhaps find some inspiration for my own to be written rule set. I was told the close combat rules are quite nice. Jan-Willem had made an excellent looking table were the four musketeers and their trusted friend Planchet had to bring a chest containing something Lady DeWinter had left somewhere (she does that sometimes) to the harbor where a ship was waiting. The chest was placed on a cart which was pulled along by Planchet. Somewhere near the dockside was a group of Cardinal Guard lying in wait. These were led by the vile Rochefort himself. 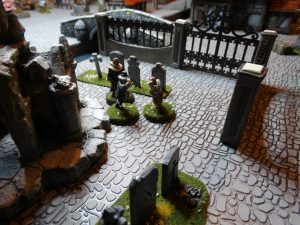 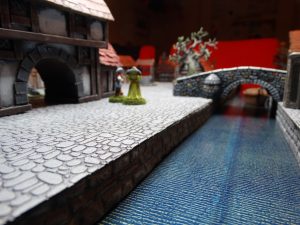 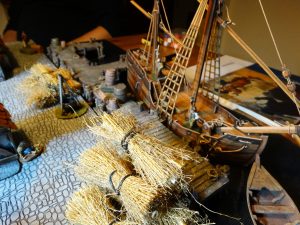 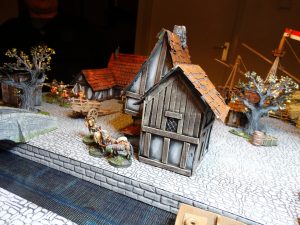 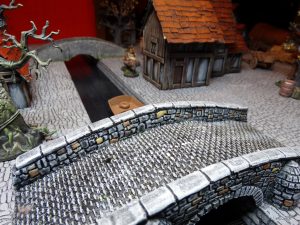 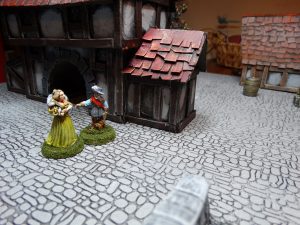 The Guard split up in two groups as the musketeers and Planchet made a run towards the nearest bridge over the canal. Now, in this game it might look as if the musketeers are greatly outnumbered, which they are, but the heroes in this ruleset are indeed real heroes because of their extra skills. I sent d’ Artagnan over towards the small bridge were a group of guards led by an officer tried to outflank the musketeers. The rest stayed with Planchet. D’ Artagnan has some nice equipment and attributes which makes him a good close combat fighter. So my plan was to get him as close as I could as fast as I could get him there. In the second movement phase I also sent Porthos his way. In the meantime the guard took some shots and d’ Artagnan returned fire. Rochefort and several guardsmen were rushing towards the main bridge to intercept the chest. 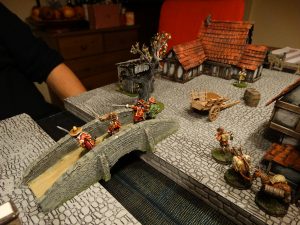 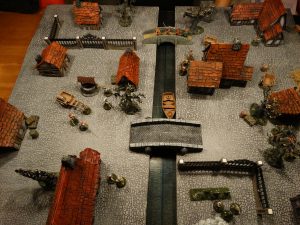 While Aramis, Athos and Planchet were trying to cross the main bridge, a firefight and close combat had d’ Artagnan kill some guardsmen, but he also fell in the process as well. Unable to save him Porthos opted to cross the canal in a different way by jumping from one side onto a small boat which was tied at the other end. Very heroic indeed, worthy of a musketeer of legend. Close combat fighting had also ensued between Rochefort and his men and my other brave musketeers. They needed to cross the bridge fast. 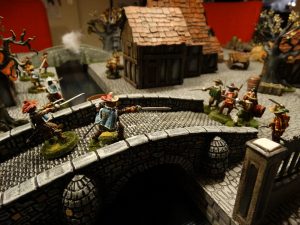 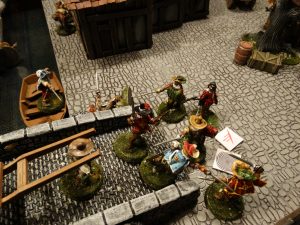 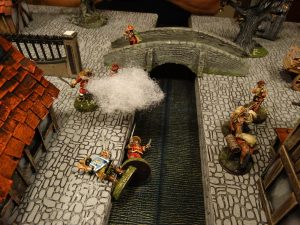 In the final fight at the bridge the guard killed Planchet pretty easily, but I was able to dispatch Rochefort quickly. That only left the remaining guardsmen while Porthos closed in from the other side. Aramis fell as well, but in the end it would not matter. The two remaining musketeers broke through and won the day (and we all know the others will re-appear in the sequel film, so no harm done). 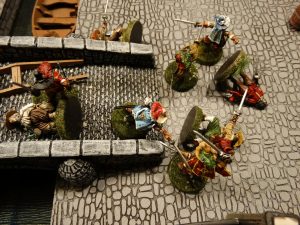 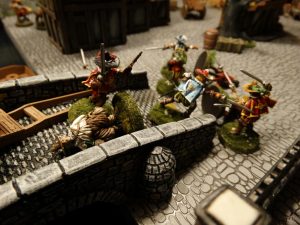 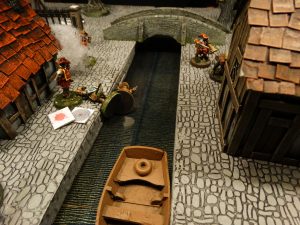 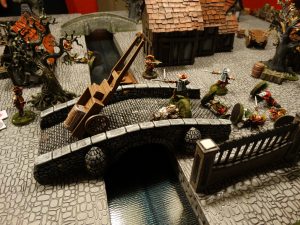 The close combat mechanics of this ruleset are indeed nice. Every model is assigned a certain number of attack tokens. When a fight starts you have to decide how many tokens of these you assign to offensive or defensive actions. The player with initiative starts and can place extra offensive tokens to gain more dice in the attack. Then the defending player can also place an extra defense token to gain more dice. The result of the total number rolled plus several modifiers (for skills and initiative and such) is compared to each other. When the attacker has a greater total it is determined by how many points and the greater the result, the more damage is dealt. The nice thing about this mechanic is the way you can influence the combat by being more on the offensive or decide to use all your tokens for defense (for instance when you know you have to fight a more powerful opponent). The rest of the ruleset is very straightforward and can be applied to a lot of time periods. I can recommend ‘En Garde’ to all players of these kind of skirmish games.
Level of opponent: veteran

Well, thats it for now. Cheers all!