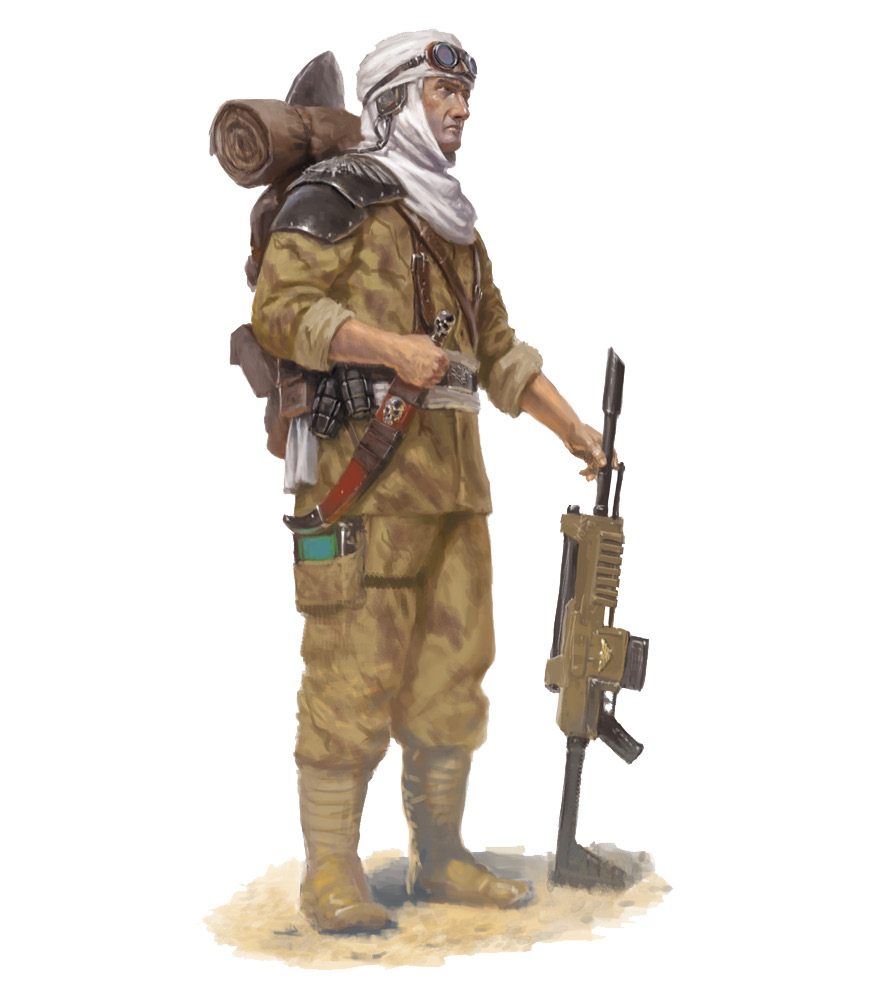 Today I realized I had nothing to write. All projects I have been working on have not gotten enough attention lately to justify an article.

Luckily my wife came up with a solution and a challenge. Write a short story in a wargames setting in 1 1/2 hour. Let’s see what you can come up with. (At this point it might be fair to say that I am an aspiring writer, but sometimes need a gentle nudge to actually get something written).

Well, time’s up. Here’s what I came up with:

Kareem looked to his left. The robes around the faces of his fellow soldiers showed only the eyes, but in them he could see the determination commonly found in his people. The will to live on and grasp every shred of hope to do so. It made them strong and inventive. The Imperium of Mankind acknowledged this and the sluggish Departemento depolyed them in the harshest environments. Desert planets, arid and hot, were like home to Kareem and his kin. They could withstand these environments for far longer than other humans. Not only that, they could perform their duty as needed.

Adama III was one such planet. A ball of dust all but bereft of life. Small communities were scattered throughout the deserts, all of them there for one purpose; the rich deposits of ore that could be found buried deep within the planets crust. Deposits so pure the Mechanicum would go to war for them. Which it did.

When the people of Adama III refused a scheduled bulk lander to enter lower orbit, operatives on board had requested an explanation. The answer had been plain and simple. The Mechanicum would no longer profit from their labour. Another buyer had presented himself. One with a far better offer and the power to defy the Imperium when needed.

This was why Kareem and his fellows were now making their way to the rendevouz point near one of the mining facilities. Once there they would meet up with other contigents of the army and begin the first preparations for the attack. The road had been long and hot. Long enough for hem to speculate about their adversaries. Hot enough for them to nearly deplete the meager water rations they had been given. Nevertheless, onwards they went. The Mechanicum was prepared to go to war, but the Imperial Guard was their weapon.

Dust clouds obscured their view in many directions. To the east higher dunes led to one of the few mountain ranges of this world where Kareem could see the faint outlines of Mukaali riders, the massive beasts plowing forward at a sluggish pace. The column of artillery to the west added more dust to the air and it’s presence could only be determined by the low rumbling sound that accompanied it.

Not for the first time Kareem started to wonder who would have the audacity to provoke the might of the Imperium. Orbital scans had revealed no armed forces on the planet’s surface, nor had they encountered any vessels or fleet in the system. Could it be that the population had tried to bluff their way out of the grip of the Techpriests? A foolish notion since they should know the retaliation would come. They were well aware of the value of their product, enough so that they would bargain with it. Surely they would be aware the cult of Mars would go to great lenghts to secure this precious commodity. There had to be another explanation. Armies could be hidden. Perhaps the planet was riddled with tunnels, connecting large subterranean communities or shelters. Tallarn was not the only planet where survival had forced the population below ground.

His thoughts led Kareem home. It made him pleasantly unaware of his surroundings and the numbness of his feet. Thirst became nothing but a faint discomfort. His state of mind made him able to march onwards through the stingings swirls of dust. It made him numb in all senses.

It was therefore that when the first warning came Kareem was not able to respond to it, or even register it for what it was. He felt a slight uneasiness creep into the back of his mind. A thought gently forced itself into his daydream. Gradually it formed itself into words, at first like a silent whisper. Then they slowly rose in power and meaning. A phrase formed, repeated over and over again. The feeling accompanying the words became unbearable and when Kareem finally snapped back to reality he caught himself murmering. ‘All is dust.’

He became aware of his comrades around him, most of them gripping their lasguns tight and anxiously scanning the dust clouds. Others were still walking forwards, seemingly oblivious to the discomfort in the ranks, absently murmering the same words Kareem had uttered only moments before.

He saw a sudden flash of blue in the dust ahead, the outline of a massive warrior.

It appeared they were about to find out who would oppose the might of the Imperium.