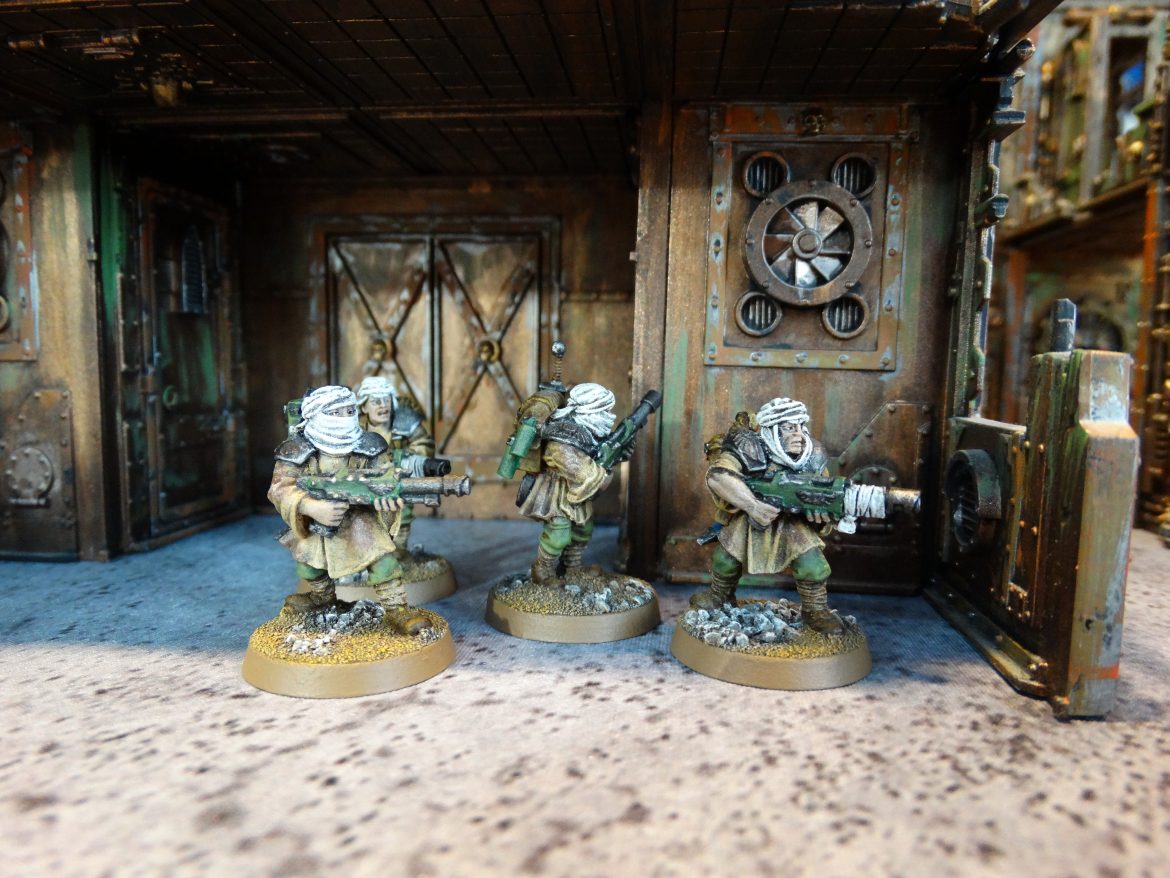 I made a Tallarn gang using the Astra Militarum list. I knew my opponent would bring orks and knowing their toughness in normal 40k I thought it would be nice to bring a meltagun and sniper. The sniper also got some items to increase his range and to hit score. All other team members were veterans and all of them got camo gear. The sergeant was running around with a bolt pistol and power sword. All in all I had an eight man team. 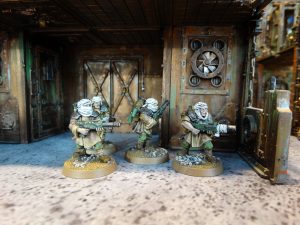 I was quite surprised to learn the orks would bring twelve models to the table. As it turns out they are not that cheap in points cost, but weapons are crude and therefore cheaper. And yoofs are cheap as well. 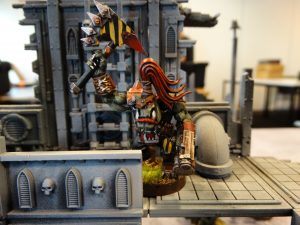 Neither of us had played with these rules yet, but it turned out to be an almost exact copy of the Necromunda rules, which I know well. Some tweaks here and there were the only differences I could find in these two straightforward gang fights. So, does that make this new version of Necromunda just as good as the old game? Ruleswise I would say yes. The old system was a nice game. Since the basic rules have not changed that much it plays just as good (or bad) as Necromunda. 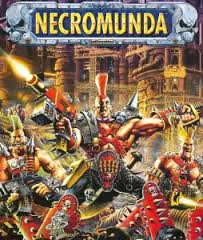 But whereas the Necromundian gangs were all simple humans and therefore quite balanced, these rules were made to go with the existing miniature range of 40k. This brings me to the part were in my opinion the old game is better than this one. The gangs for Shadowwar are made up of orks, dark eldar and all the other races and armies. These are all accompanied by their own profiles and special rules. This can bring some unbalance to the games.

As an example I can use the games we played yesterday. Orks versus Astra Militarum. Now, the orks are bad shooters because of their low ballistic skill value. The guardsmen on the other hand have the advantage of hitting their targets with their lasguns. But since the lasgun has a normal strenght the toughness of the orks makes for low wounding opportunities. This pretty much ensures that the greenskins will get up close and personal in the long run without loosing to many of them to gunfire. When the charges start it gets bloody for the humans. The orks get extra bonusses for being orks and this in turn makes sure they win every close combat against the humies. In my opinion the rules for gangs and their statistics are causes for possible unbalance in the games. More so than in classic Necromunda.

That being said, we had loads of fun yesterday. Mainly because we are playing for fun and therefore make sure we both enjoy the game. We give each other room to explore the pros and cons of our gangs and withold from taking immediate advantage when the opponent makes a tactical error. 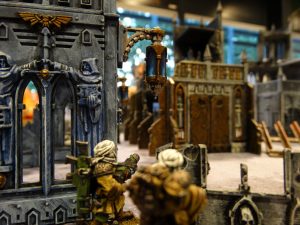 This resulted in two fun games were both of us won one. I must admit that my Tallarn only won the second game because they kept making successful bottle tests, but the orcs fared not so good when they finally lost enough gangers to start testing themselves.

Final thought for today: if you already have the Necromunda rules and want to play Shadow war you can just use some online pdf files to create your gang and have no need to buy the rulebook.