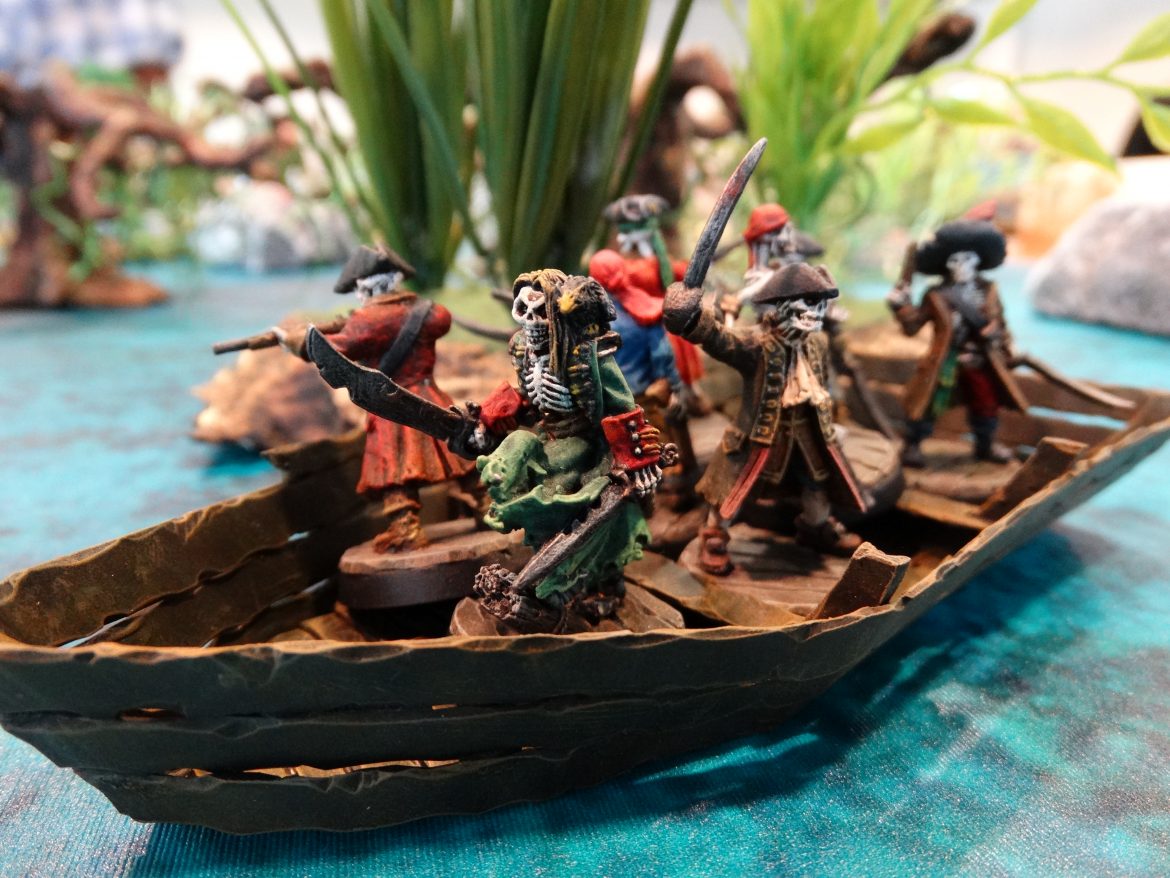 Last Friday we played the next scenario in our Legends of the High Seas campaign. This time we entered the swamps of the island we ‘invaded’ last game. You might recall the aggressive natives led by Big Betty, the pirate captain who worked for the English Navy and gotten herself ‘killed’ by my Captain Grimm for her treachery. Big Betty eluded my wrath last game unfortunately, but it seemed I had a new oppurtunity to end the life of my arch nemesis.

Matthijs was responsible for this scenario (we are still on the island his captain said we would find great riches). I designed and printed a new battle mat for the water of the swamp and Matthijs made the rest. This involved scratch build mangrove trees and such. Excellent work once again. 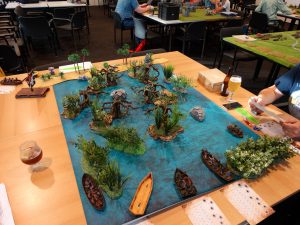 We all started at the same end and were only allowed to bring 8 men of our faithful crews in one rowboat. At the other end of the table we could find a big treasure chest. But this was locked. Randomly placed giant crabs held six keys. Each crab defeated gave us a key. But only one key would fit the lock and we could only find out which key was correct by inserting it in the lock on the chest. And then there were some randomly placed caskets and such which could hold interesting items or perhaps some pocket change. Matthijs made a special deck of cards for these. 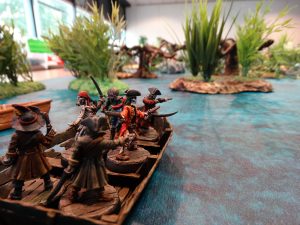 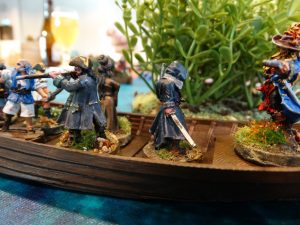 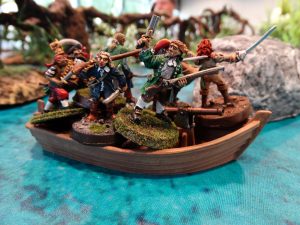 The crews present were my own undead chaps led by Captain Grimm, the Chinese led by Captain Hoe Lang, Captain Sweet Jane and her crew of underpaid misfits, Captain Bloedberend (who led us to this cursed island) and the crew of Jan-Willem with their very small, but cosy boat. And to my delight Big Betty and her crew appeared in a boat right between me and the Chinese. Captain Gimm’s face became more grim than ever and I forgot all about the treasure, instead focussing on destroying the big breasted bitch and her treacherous crew. No pirate captain can fight against me in the employ of the English Navy and get away with it.

I made a pact with Hoe Lang and went after her. The other three crews went straight for the crabs and somewhere along the line some small skirmishes broke out between some of them. 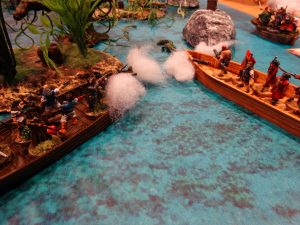 Big Betty rowed towards one of the small islands and went ashore to find some loot. My crew quickly rowed after her and opened fire. 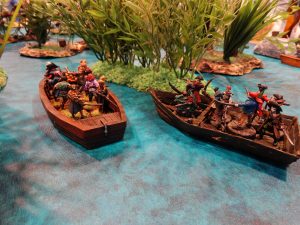 Matthijs had made some rule adjustments for this game. Shooting from boats to other boats would always hit the boat when a hit was scored. Each scored hit would result in a hole in the boat. Each hole in turn would cause one unit of water to enter the boat at the end of each movement turn. To many water and the boat would sink. Crew members could either row or shoot or try to repair a hole or even try to get rid of some water in the boat.

It did not take long for us to shoot several holes in Betty’s boat, but at that point she had gotten ashore. Captain Grimm followed as fast as he could and charged her. Unfortunatelly Betty’s crew joined in the fray and Grim was outnumbered. He has three attacks, so there still was a chance he would do well. 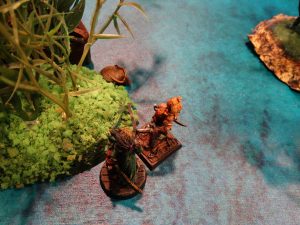 Grimm’s crew went ashore as well and eagerly joined the fight. It became a tangle of close combats where Betty lost her two rolls for being fortunate in the early stages of the fight. Grimm’s raven (acting as a parrot) and his three attacks served him well. In the end I lost four of my crew members, but all of Betty’s crew where out of action. The big girl with her two big assets was last to go. 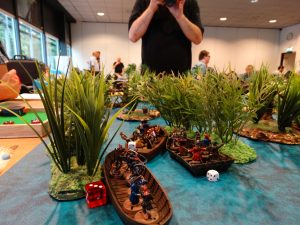 In the meantime the other captains were chasing giant crabs and fortune. In other words; doing what pirates do best when not fighting each other to the death. My Chinese ‘friends’ abandoned the pursuit of Betty from the moment her crew and mine starting hitting it off in close combat. Sadly they had only time enough to find some small tidbits here and there. On the other side of the table Sweet Jane ran out of luck for the umpteenth time and had to return home empty handed and remained the proud holder of the largest debt in the campaign. (I wonder how long she can keep her crew from mutiny.) The English crew had some skirmishes with giant crabs, but in the end it was Bloedberend, the devious captain who led us to this island, who found the right key and claimed the big treasure. 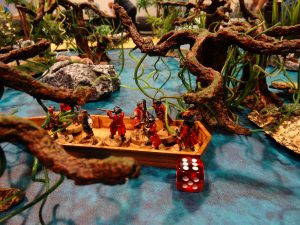 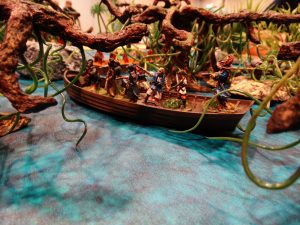 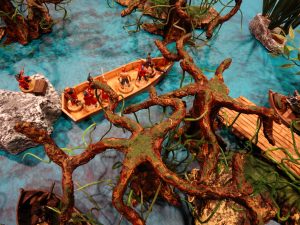 I cared not. I had done what I intended to do, beat the crap out of Betty. In the post battle sequence I lost one of the four crew members. John ‘the Baptist’ was beaten up so severely that we could not put his bones back together. The rest came out just fine. Betty’s crew on the other hand was less fortunate. Rob rolled poorly for Betty herself. She was actually dead. And so were another three of the crew. I felt bad for my friend Rob… for a few seconds. Then I started to celebrate my revenge in good pirate style. Harrrrr!!! Fear my wrath you scurvy buggers!