Last saturday I had my first Apocalypse battle. I was invited by a fellow Tallarn collector/player to join in. Since I have only ever played some basic 40K games and given the fact that I lost them all, I was pretty sure my Tallarn could easily be crushed by a much greater force than ever before. Always ready to try something new I happily agreed.

We would be playing in teams of 4 and would each bring a 3000 point army. That’s when I realized I had only some odd 2000 points worth of painted Tallarn. And I refuse to bring unpainted models to a game. The game was only about a month away, so I decided to tackle the problem in various ways.

First I added some non-Tallarn troops in the form of Necromunda units. My Escher girls have been painted for a long time and I had once added an old Chimera tank to their ranks for when I would upgrade them to Imperial Guard. For the same purpose I had once started on a Sentinel and Icarus pattern lascannon. These would only need some minor paintwork to be finished. They would form a new veteran squad, transported in the Chimera and accompanied by the Sentinel. Then I realized I also had a Ratskin gang painted. These would make another veteran squad. A few weeks ago a friend donated some old tanks he had once (badly) painted so I could perhaps make some scenery out of them. One of these Chimera’s would have to do as a transport for the Ratskins. 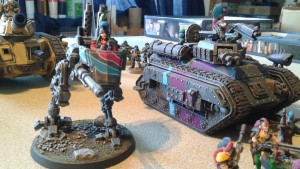 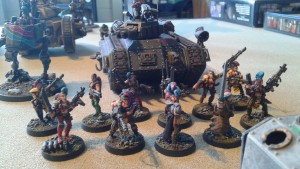 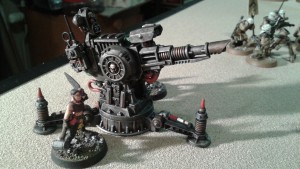 For the Tallarn I wanted to add an aegis defense line I had already prime colored. But all this would not boost the total points of the army very much. I wanted to take at least one super heavy vehicle. Since I had already build up most of a Baneblade I decided to finish it within a month. Quite a big project in so little time for me because of a job and family, but I would give it a go. I made good progress, but alas I did not really finished the defense line and tank. Both of them had enough paint on them to look finished enough on the table, so I was pleased in the end.

Then word came that one of our team members could not come and we failed to find a replacement due to the short notice. That meant that we three had to bring 4000 points army worth each. Fortunately my Tallarn team-mate could provide some more fortifications and add extra tanks to the ranks so the total of our combined forces would equal those of the opposing side.

Stress levels went down to normal and I was ready to play an apocalypse! This is the force I would bring along (and I could finally make good use of that big KR Multicase I bought recently). 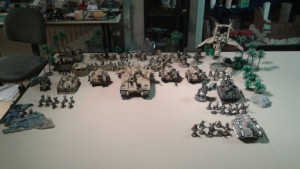 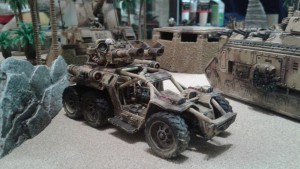 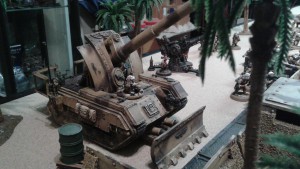 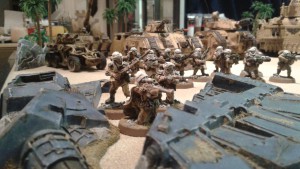 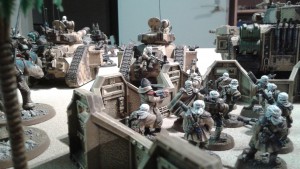 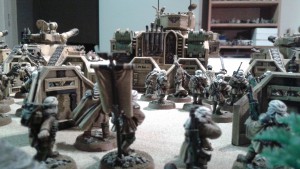 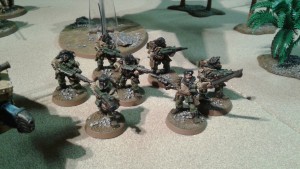 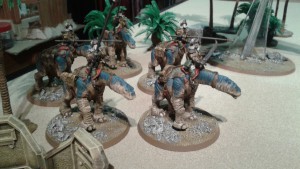 And here are some shots of the (unfinished) Baneblade. 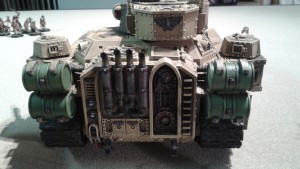 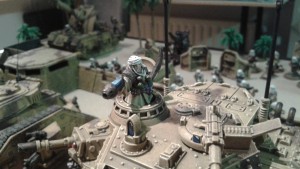 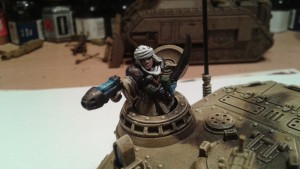 Apocalypse day arrived and I loaded all my stuff in the car early in the morning. When I arrived I finally got to meet all the guys I had been chatting with for a few weeks and we could begin the setup of the tables. My Tallarn would fight alongside another Tallarn army and a Chaos Demons host. Unlikely allies, but hey, this is an Apocalypse and all normal rules are down the drain anyway. We would be fighting Iron Warriors, Mechanicum, Grey Knights and a combination of Eldar and Tau. No worriers there I would say :-).

Once decided who had initiative and play the first round I found out what my biggest drawback this day would be. My lack of experience with playing the 40K game meant that I would be slowing down play because I had to seek every entry of every unit and weapon to see what the specific rules said. The other players had much more experience and could easily outpace me when it came to the rules. Fortunately they had no problems with it and helped me through when the rules were common enough that they could quote them to me. Even when not taking into account my slower turns a full game turn of one team would easily take a full hour to complete.

Both sides are set up. 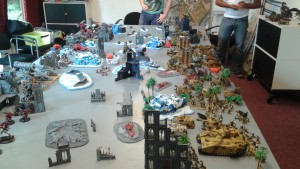 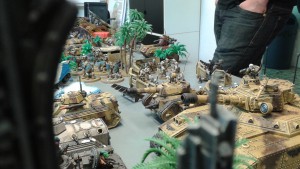 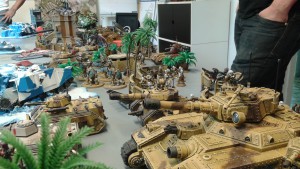 The first turn was for the opposing side and it immediately proved to be a disaster for my Tallarn troops. The Mechanicum had brought along a very big Ordinatus gun and they were eager to try the damned thing. My Baneblade was it’s first target and the result of a very lucky dice roll meant that the full 9 hull points were shot off. It went up in an (not so impressive) explosion. By ‘not impressive’ I mean it did not kill much off the rest of my army when it blew up. Still, my month of frantic painting went up in smoke to soon. The Ordinatus player himself was quite surprised at the destruction it could bring and felt (somewhat) bad for the result. I could not contain myself and made sarcastic remarks about it for the rest of the day, just to jank his chain.

When all the smoke cleared it appeared that the rest of our armies had pretty much survived well enough and it was time for our turn. Movement phase was done fast since all the Imperial Guard units and ordnance would stay put behind their fortifications. Then we had the chance to give ‘em hell with all our guns. Now, when all team members start shooting at the same time it is hard to keep track of what happens on the other side of the table, so I can only tell that my dice rolls were disastrous and not much damage was done om my part. We did bring in all our reserves so we did have all our forces in play right from the start.

From that moment the game was pretty much about movement and shooting, wanting to see what forces would not be completely shot up and fire back. I had tremendous fun, but I must admit that I am not really pleased with only shooting back and forth so I decided to get my veterans, storm troopers and Mukaali Rough Riders closer in for assault. When you face Grey Knights and Iron Warrior Chaos Space Marines this is not a healthy choice for your guardsmen I found out. So, in short, they tried very bravely, but could not harm the buggers much. But I had fun while doing it. I had a very good time and would gladly participate in another game in the future. 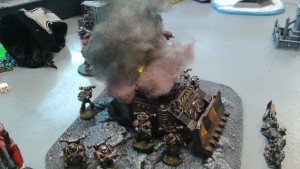 One of my few victories; the destruction of an Iron Warriors vehicle. The embarked crew survived and later on would defeat my Storm Troopers and Tallarn veterans in close combat.

The smoke at the bottom is were I used to have a Baneblade. 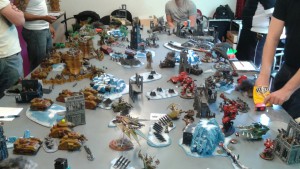 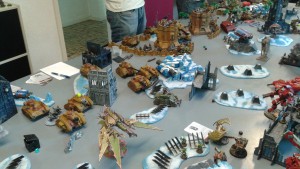 The other side of the table with my allied Tallarn tanks and Chaos stuff. 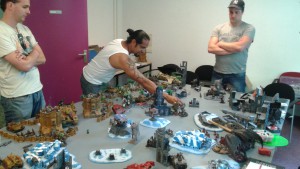 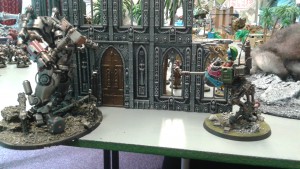 When their transport was shot to shrapnel, the Escher girls rush out and try to rendevouz with their Sentinel who is bravely, but very foolishly, squaring off against a Grey Knight thingy. They lost off course, but were able to hold off the bugger for the rest of the game. 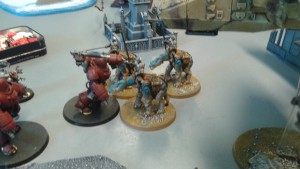 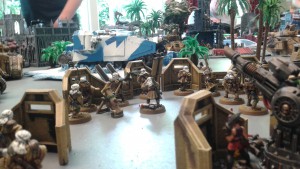 The regular troopers did not move for the entire game. The Mukaali charged some Mechanicum robots. Two of the riders were killed in the overwatch response. The remaining three dented some of the armored plating before they were crushed without remorse. 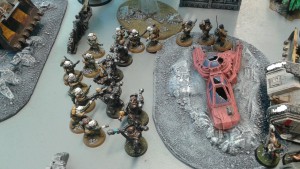 The assault phase between the Iron Warriors and my Stormtroopers (see them bravely running away top right) and veterans. 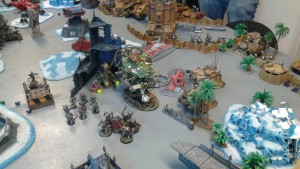 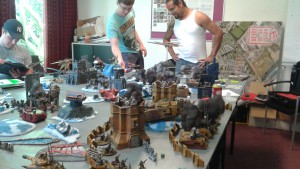 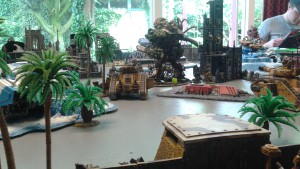 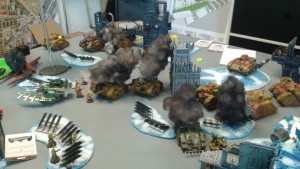 Lots of smoke appeared at the other end of the table when a lot of Tallarn tanks were destroyed.

In the end we lost the game, but I had a good time.