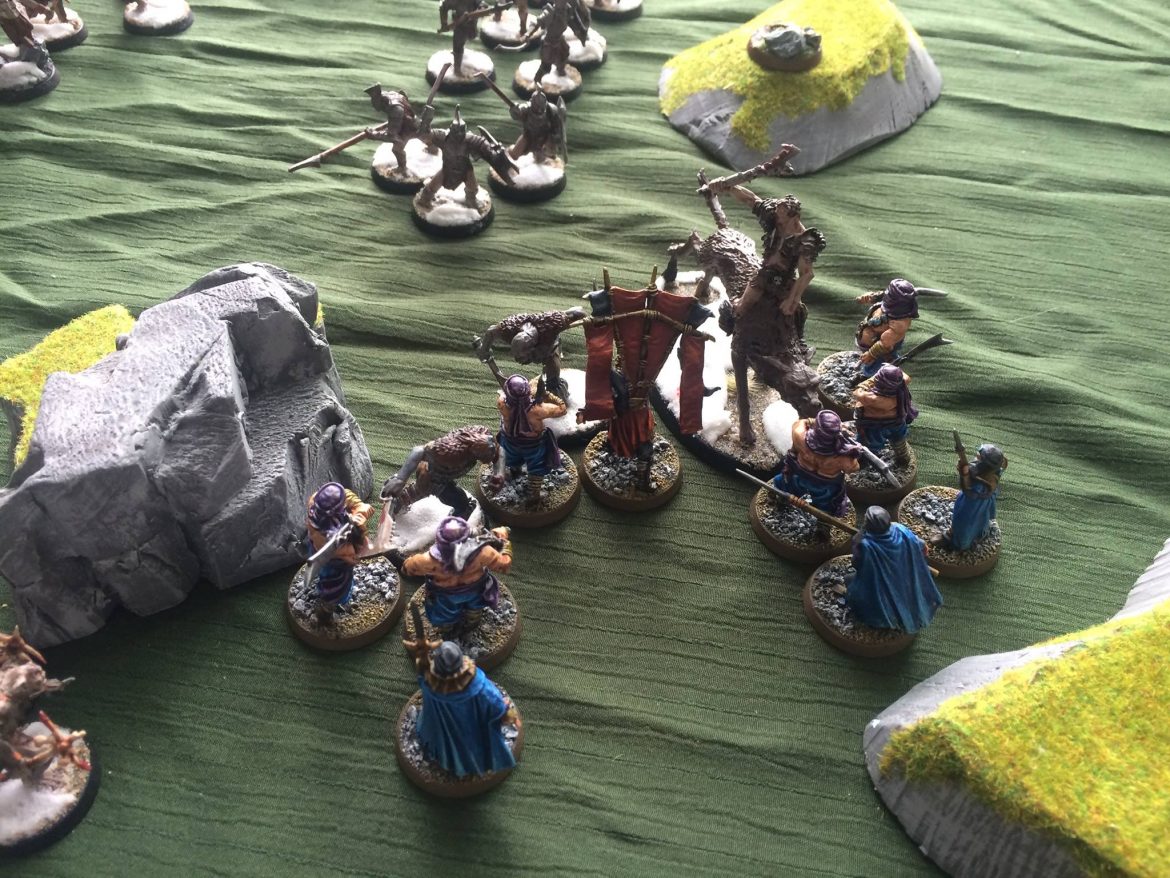 Last Sunday I packed up my finished Haradrim army and lots of scenery and such to help Coen build some more nice gaming tables and headed towards Dordrecht for Strategy 2018. This 9th edition of the tournament was attended by 26 gamers from Holland and Belgium.

After the startup talks and such I was paired up with Michael who played with a Gondor army. A very appropriate way to start for my Haradrim. The scenario for this round was Lords of Battle in which both sides try to wreak as much havoc as possible in order to gain as much victory points as possible. Michael is an experienced player from the Belgian ETC team which helped the game go smoothly because of his knowledge and experience with the game. I suffered a major defeat at the hands of Boromir and his host, but Michael was a good sport and helped me as much as he could with tips and tricks during the game. He also had some good advice afterwards so I might have a better chance in the games to follow. Suladân and his warband had not even seen any action this game because of some poor deployment and my hesitancy to get them to cover the ground towards the enemy line while risking enemy arrows. I also needed to get my band of Watchers of Karnâ in close combat as quick as possible. I learned a lot in this game and had great fun. 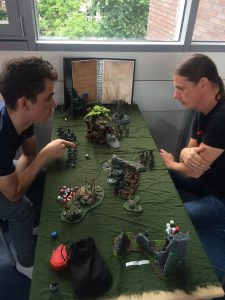 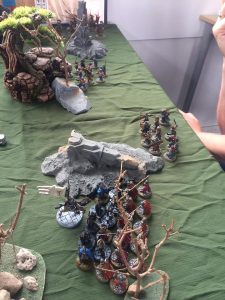 After some lunch the second round started and I faced another Belgian ETC team member, Jasper. Jasper brought along Orcs and Goblins from the Hobbit. It had a leader on a Warg and some Berserkers as well as a Bat which could fly over models and cause harm while doing so. I dubbed the thing ‘the Pooping Pigeon’ so it would not sound as scary any more. I’m afraid the name stuck and Jasper also kept referring to the beast with it’s new nickname. (Psychological warfare is real! 🙂 ). We played the Heirlooms of Ages Past scenario. It sounded like a nice scenario to me, but Jasper had some reservations about the way this scenario is set up. Nevertheless we started with much enthusiasm and as the game progressed it turned out to be a blast. The deployment of the warbands is pretty random during this scenario and the hunt for the ancient relic makes for a lot of maneuvering on the table. There were some initial skirmishes with some casualties on both sides but when the heirloom was finally revealed the fight began in earnest. Initially Jasper had a very good position and had Suladân and his warband pretty much pinned in close combat. My Raiders were on the way though, as well as my Watchers of Karnâ. The other band of Warriors was locked in combat at the other side of the table, which kept them out of the big fight. But then the unthinkable happened. I started rolling sixes at a very alarming rate. The Warriors on the wrong side of the table started killing orcs left and right. At the rate this was going I could even manage to wipe out this band of the ugly beasts. It would not help them get to were the real fight was going on quick enough, but it provided me with a morale boost nonetheless. The Raiders started to cut a path through Goblin Mercenaries and while the Abrakhân Guard did not manage to break away from combat and were most likely to be finished in the next round, Suladân himself had the idea of showing his lads how it was done. He was engaged in combat with the leader (Bolg?) on Warg and a trio of well armored orcs as well. Cowering behind them was the lone Orc carrying the ancient relic. I was pretty sure this was it for my fearless leader but he managed to win the combat! And killed two of the orcs in the process as well. All of a sudden Jasper had lost a lot of models in this one round. No matter what the outcome of this battle would be, moral victory was allready mine! In the end Jasper managed to hold on to the relic but even in the last round it could have gone wrong for him as my archers took some more shots at the orc holding it. It was a very tense game and we both enjoyed it a lot. Again, I had an opponent with a lot of experience and the good sportsmanship to help me during the game with tips which made it a good experience. The fact that I had one round of brutal close combat results made the game exiting for Jasper as well. Oh, and The Pooping Pigeon was not as scary as it could have been during this game, so the new name helped. 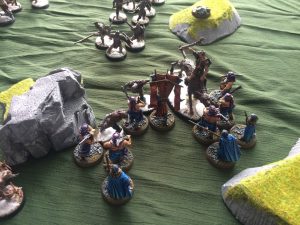 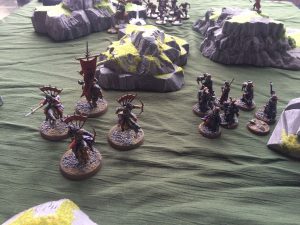 The third game I played against Thijs and his army of spiders. Well, mostly spiders. They were led by two goblin shamans and had a monster (a sort of Balrog-light) as back up. The scenario would be Contest of Champion in which you gain victory points by killing as much opponents with your army leader. The deployment rules make for a quick pitched battle. Thijs’ leader was a shaman who was not a good close combat fighter, so he placed his spiders in such a way that they could engage Suladân in the first round. When some magic also made the spider in question enraged it had the audacity to kill Suladân in the first round! The only way for me to gain victory points was to kill as many of his forces as I could and try to get him broken. Not an easy task when batswarms are flying and big monsters start hurling my forces around. I gave it a good try though. This also led to my biggest mistake during this game. Some of my warriors had flanked the spiders and managed to get behind their lines. I moved one of them a bit to far and as a Jack in the Box the leader shaman ran from his hiding place and attacked my warrior. The foul creature won the combat and now needed a 5+ to kill my warrior and gain the needed victory points. Loo and behold, Thijs rolled a six. A well deserved victory. 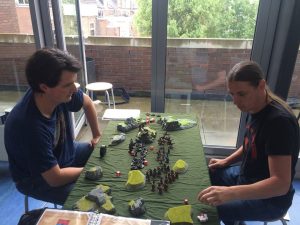 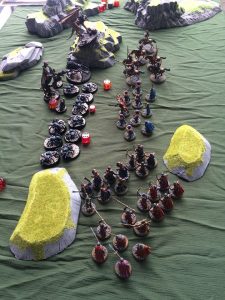 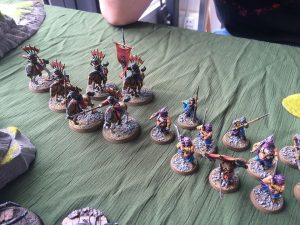 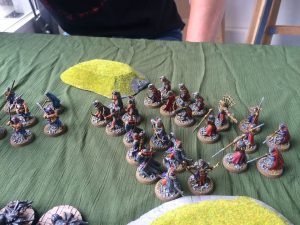 At the end of the day the winners were revealed. There was a sportsmanship prize (which apparently I almost won) and a best painted army trophy. My army was just beaten to that by Thijs’ Spider army. Damnation! These eight-legged freaks had beaten my Haradrim again! Last but not least there was a winner of the tournament itself (who’s name I sadly can not recall now). I had anticipated to become last of the 26 participants, but to my surprise I ended 25th. Huray! 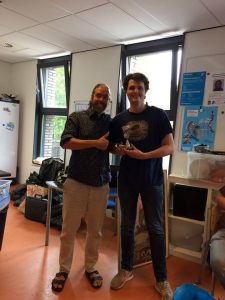 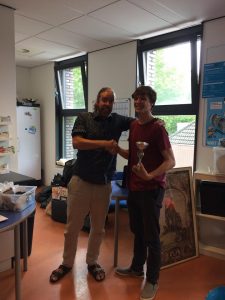 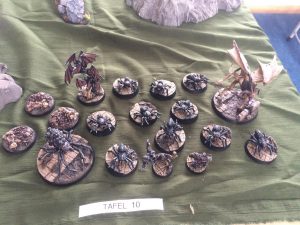 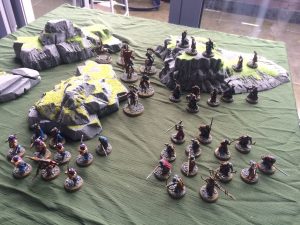 I had a great day with three enjoyable games. All three of my opponents were very sportive and helped a lot to this experience. Thanks to ‘mad looney’ Coen for organizing this tournament and his yearly nagging for me to participate. I did not have time to take pictures so all pictures in this entry are made by Coen.

I now have a Haradrim army which I can start to expand (but not with the close deadline breathing down my neck). I fully intend to do that, but not in the near future. Other projects are vying for attention and I am currently in the process of deciding what project I want to tackle first….