Well, well, well… yesterday the breaking news form Games Workshop was the return of Necromunda. And only minutes later all hell broke loose on the net with everybody’s personal thoughts about it. I had my own feelings when the news came. I shared some of my thoughts here and there. Now that the news has been around some more I think I can put my personal feelings into the proper words.

First off, the fact that Necromunda is coming back is awesome! Games Workshop seems to be listening to the people paying good money for their stuff. The setting has always been a favourite for many gamers and rightly so. That we are returning there is good news for us older blokes who had so much fun with the original game. The generation of gamers who did not have that privilege will be getting that now.

Games Workshop (or actually Forgeworld, who are now in charge of Specialist Games as far as I know) announced that all the old gangs will be coming back. More nostalgica!

I think this is overall great news for the people who do not own the original ruleset and models. 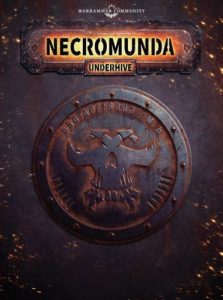 As a person who does own the original ruleset and all the models that came with the original release I do have some reservations about the upcoming version. I am a nostalgic old fart I guess, but I still like the old ruleset. I am also very fond of the old models. The site ‘LittlePlasticSoldiers’ had some info they obtained from Specialist Games designer Andy Hoare at The Forge World Open Day 2017. The site states that the new ruleset will be based on the 8th edition 40K rules, but then tailored for a smaller scale skirmish game. And that there will be action points which will determine the order of play instead of the turn based system from the older days. This is in itself no bad thing. Of course we need to wait for the release and try the rules before we can judge them, but these small tidbits are in itself not bad news in the making. My ‘problem’ here is that it will probably mean that the new version will not be compatible to the old one. In itself no big deal, but next to the original ruleset I have a lot of extra material that goes along with it. Older White Dwarf articles, Fanatic magazines and Gang War magazines. These have tonnes of extra material to make a Necromunda campaign more exiting and diverse. All this will probably not be useable with the new version.

In the end I should be able to get past this. I mean, it is not as if I am unable to make up some new and exiting stuff for a new campaign. And perhaps the older material can be used with a little tweaking here and there.

I still have all the original models which I can use with the new rules. And there will be new models! The box set will contain plastic models from the Goliath and Escher gangs. The Forgeworld Open Day showed some of them. 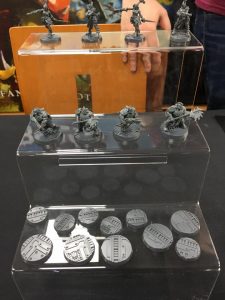 There are also new bases with nice Underhive designs on them. Cool! The Warhammer Community newsflash about the release had pictures of the painted models. 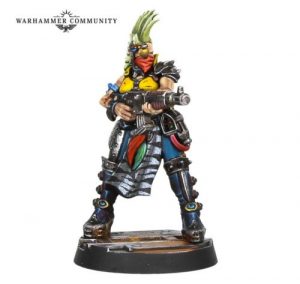 Personally I do not like the new Goliath. They are a bit to much over the top as I think most of the new Games Workshop models are. A question of taste I guess. The Escher on the other hand look nice (apart from the awful paint job). The Escher have always been my favorite gang and I think the look and feel of these new models are the same as the old models.

There is some nostalgic voice at the back of my head claiming that the older models are much cooler then these new kids on the block… but I guess that’s just little old me. The new models could blend in pretty well with my Escher once I paint them the same way as my older models. The one thing I am somewhat afraid of is the scale. I came across a scale comparison which shows that the new models are bigger than the older ones.

If this is true I might be disappointed. The new models will then be much bigger then the older ones and will not fit in with my existing gangs at all.

Further news (or rumors) tell us that the box set will have no scenery, just the book and the two gangs. The new scenery for the Armageddon Shadow War setting are to be used and the Zone Mortalis sets from Forgeworld. This in itself is not a bad idea. The scenery looks good enough to be used as an Underhive board. My only problem is that this scenery comes at a price I am not willing to pay.

The news that did get me very much exited is that we might actually see new gangs in the future. And even better, more background as well. I am very eager to learn more from Hive Secundus for example, something that is now rumored to be one of the things we will get to see more of.

So, all in all, still some mixed feelings. Exited as hell on the one hand, a bit disappointed on the other. But I will not condemn the whole thing before I actually have tried the new rules and have held the new models in my hands.