Last Friday we tried a new game: Gangs of Rome by War Banner. Gangs of Rome is an 28” skirmish game set in the ancient city of the Roman Empire. War Banner is a relative new company, but apparently has some veterans in their ranks. This shows in the game mechanics of Gangs of Rome. But before I elaborate further on the game, some thoughts about the box and it’s contents. 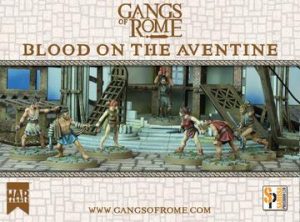 The starter set contains all you need to play the game. This in itself is something I expect from a new game, but is not always the case unfortunately. The box contains the rulebook (which you can also download for free from their website https://gangsofrome.com/ ), six gang models by Footsore Miniatures, all the cards and tokens needed, special roman numeral dice, rulers, an additional Gaul model and on top of that a scenery piece of a temple under construction by Sarissa. All this for £ 35,- makes it a high value for money starter set. 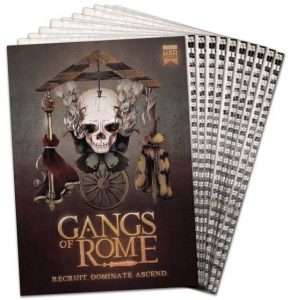 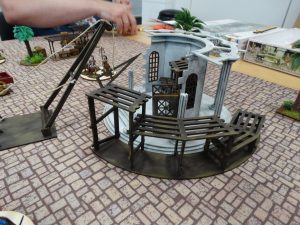 As said, the starter set contains enough to play the game. There are six gangers and since you usually field three or four gangers there are enough models to make two modest gangs. Together with the extra Gaul model and scenery you can play the scenario provided in the box as well. The only thing really missing which is actually essential to the game are models representing the crowds of citizens which can play a vital part in the game. These can be bought seperately ofcourse, as well as new gangers, more scenery and playmat and such. The average gamer and collector will fall pretty quickly for all these extra goodies, especially since each new gang model comes with a new (random) character card and 4 option cards. These are also random which means you can invest loads of money to gain as many different cards as you want. And herein lies the danger for collectors. Buying more scenery to build a vast portion of Rome is also a big risk I might add. 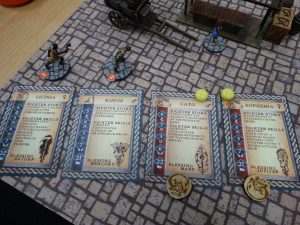 So, how about the game itself then? Having played only one game I can still tell you that it has some nice game mechanics which might be new and innovative (or not, I have not played all available skirmish game systems available today) combined with enough classic elements to give the experienced gamer a fairly quick grasp of how the game is played. Each ganger has a character card with statistics and his/her patron god and district of origin mentioned. The statistics speak for themselves, as does the special rule stated in full on the card. The patron god and district also give the ganger some possible benefits which are stated in the rulebook or the quick reference sheet. You also get a number of Dinarii tokens which correspond with another deck of cards which hold rules for extra options such as weapons and other equipment. You can allocate these items to your gangers and reveal them once needed in the game. Items can be one-use-only or stay with the ganger until discarded. Once discarded the item will return to your pool and can be used again by any of your models which is allowed to get a new one.

Gangers get randomly activated by drawing colored beads and can perform several actions in their turn such as movement, charging and fighting, use a ballistic weapon, bind a wound or blend in with the crowds (or mobs) on table. Several fixed combinations of these actions are also possible. Movement works pretty much standard (with a stylish ruler in the form of a gladius sword) as well as binding your wounds. Fighting is resolved with dice. You roll the number of dice indicated on the character card at the fighting statistic and count the number of successes. Every roll of 4 or higher is a success. The definding model rolls the number of dice for his defence value and also checks how many successes he gets. Each success negates one of the wounds. Quick and simple, and with the roman numeral dice in the box also very stylish. Once the defender gains just one or no wounds at all he gets to fight back. This is a free attack since it is not done in his own activation turn. Instead of a normal attack you can also do a brawl attack which gives you the opportunity to throw your opponent into walls or crowds (who will respond to this in approriate ways by panicking or stomping onto the victim and such). 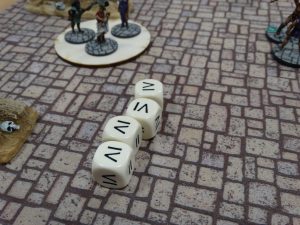 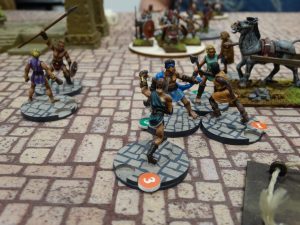 Ranged attacks are basically resolved in the same way, but these can only be done once you allocate a ranged weapon card to your fighter. These items are hidden from you opponent until the moment you use them which can give you nice tactical advatages and provide the game with some unexpected turns of events to which you need to react and adjust your choosen strategy.

A nice alternative to simply move your fighter towards your chosen objective is to bled in with the crowd. Once you move your model into base contact with a crowd the ganger dissapears from view. His turn is now over, but in the next game turn he must appear again from any of the crowds on the table. This means you have the chance to emerge on the other end of the table next to you opponent in just one turn. But be aware that at the end of the game turn the crowds can also move randomly. 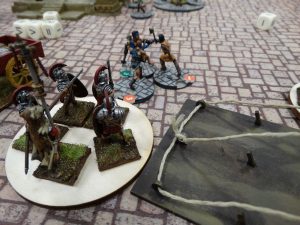 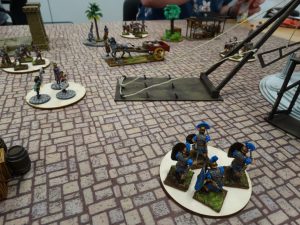 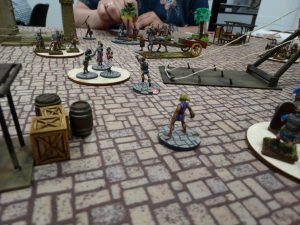 Next to all of this your gangers have a chance to gain the favor of their patron god this turn and reap the benefits of this affection, use the rules affiliated to the district he belongs to and gangers who hail from the same district get bonusses when fighting together.

All in all there are enough rules to keep the game interesting while at the same time the game mechanics are simple enough to play a quick game. The box contains scenarios to play and War Banner has announced they will produce more scenarios (you can find some in the community domain of their website). These will be neccessary to keep the game interesting because as with lots of skirmish games the basic game can become a bit boring when you only play gang vs. gang games. 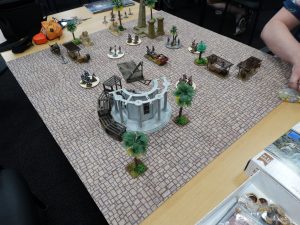 Will I buy this game then? Well, no. But that has nothing to do with the game itself. I have, what lots of other gamers/collectors suffer from, a case of over abundance when it comes to the amount of models and game systems in my posession. This means that this game would be another on the big pile. And not only that, but once in possession of the basic game there is the uncontrolable urge to buy more models and scenery, even when the basic box has only once been opened. This has stopped me from buying new games before (I have so far been successfull in restraining myself when Star Wars Armada, Star Wars Legion, the umptied new version of Warhammer 40K and Dead Man’s Hand were released or buying games such as Mars Attacks once played with a friend at the club).

Would I have bought it if it was to be my first (or third) skirmish game? Most definitely. With the good value for money starter set and the availability of more gangers and scenery this game would easily find its way in my possession.