A day at Impact

Yesterday Impact was held. A relatively ‘small’ wargames convention in Eindhoven, Holland. Last time I went there it was still held in a sports/gym hall and had not that many visitors. This year (and I believe the previous year as well) it was held at a larger venue. A friend of mine (Jan-Willem) hosted a demo game there but sadly his car broke down the previous week and he was looking for a ride. I do not live that far from him and figured I would probably enjoy myself there, so off we went at the crack of dawn. A good conversation later we arrived and could easily unload all the crates with his stuff through one of the large side doors of the hall. That being done I went off to park the car. It had been announced beforehand that parking would not be free, but unfortunately the parking fees were very high. And since the venue is located in the centre of the city no free parking space could be easily found.

Impact is being organized by a group of people from wargames club the Hired Guns. Pleasant folk and helpful when needed. The hall quickly filled up with the various traders and demo tables. As vendors go the usual suspect were present such as Wendy’s Miniatures, CCG Winkel, May’40 Miniatures and Close Quarters. There was a bring&sell, scrapheap challenge and two tournaments were held (Star Wars X-Wing and Bolt Action). 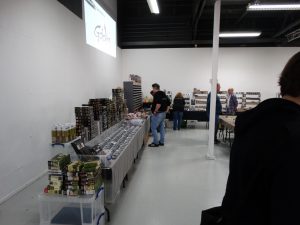 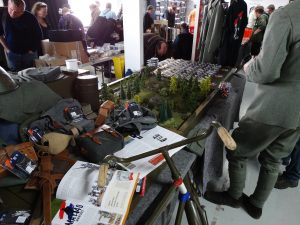 Entrance fee included a goody bag with some free Bolt Action sprues, some other miniatures and the obligatory flyers. Also included were two raffle tickets. During the day several prices could be won, varying from blisterpacks of miniatures to a small Tabletop World building. 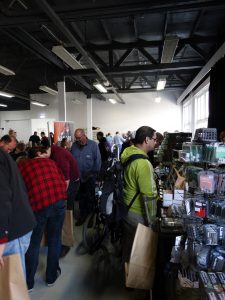 I went by the bring&sell and found some Necromunda models and such before I made a quick stroll through the rest of the hall. I was looking for some more scenery bits for the sci-fi modular tunnel system I am building, but found nothing to my liking. Some other friends would participate in the X-Wing tournament so I went over to see how they were doing. Both tournaments were held in a smaller side hall. The scrapheap challenge was also held here and I decided to participate. We had one hour to make a robot/droid from the very well stocked bitsboxes. I remembered from some years back the provided glues were very slow drying and such was the case again. So carefully planning was needed. I always like these sort of challenges. The frantic searching for the correct bits and the regular cursing when the glue won’t dry fast enough. After one hour the entries were gathered for judging. Prices were given for best youngster, best adult and overall winner. Best adult was a close call between three contenders so all three got a price. I won the overall challenge for my Wall-E kind of trundlebot with moustache. In hindsight I might have watched too much Short Circuit (Johny Five is alive!) when I was young because my winning droid from the previous time has a similar look and feel. 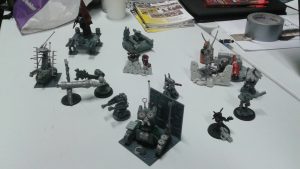 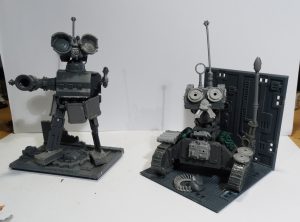 Halfway through the day we had a quick bite to eat and finished it off with some nice beers.

I also participated in one of the games Jan-Willem hosted. The setting is based on John Carter stories, so Martian skyships and such. He scratch build the various airships and uses the En Garde rules published by Osprey Games with some tweaks of his own for flying with the contraptions. It was a nice game were both Martian ships brought down the German flyer. 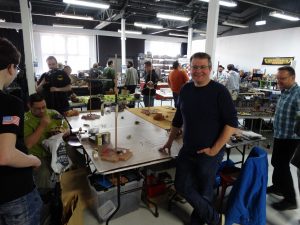 There were several nice demo games held with impressive tables here and there. One of them was a very large siege table packed with Tabletop World buildings. This time they only displayed a third of the table since the rest is still under construction or in various stages of painting. The whole table should be finished for the Crisis convention in Antwerp at the end of the year. 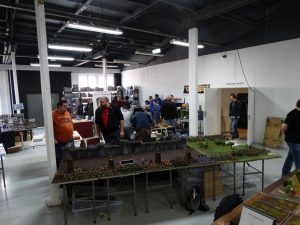 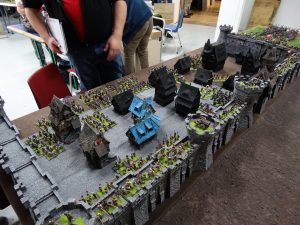 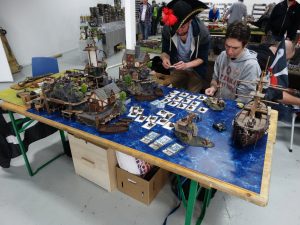 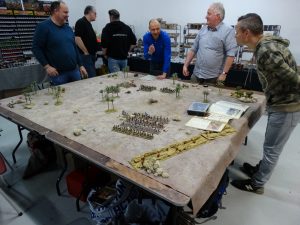 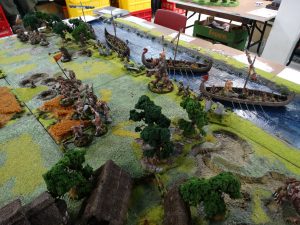 At the end of the day a lot of visitors were leaving before closing time. I see this more often when conventions are more or less based around buying. We also packed up a bit earlier and went home. All in all I enjoyed myself pretty much, meeting friends and playing some games. The convention is not innovative in it’s setup, but it has a pleasantly relaxed vibe to it. Some minor points would be the high parking fees and the bad lighting inside the venue itself. And if you are looking for a convention were you can spend your money you are perhaps better off at Crisis or Salute, the larger conventions where more vendors can be found.