The Lord of the Strategy – chapter I – Concerning Haradrim 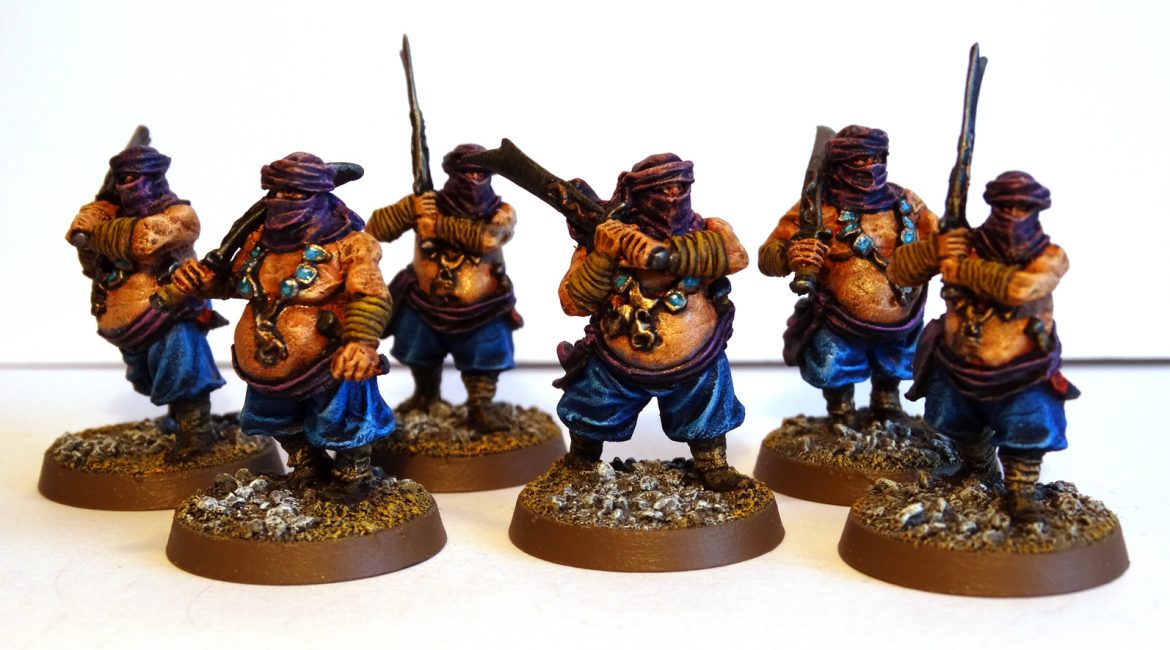 About a month ago I decided to finally participate in the Strategy annual tournament this year. Strategy is a Lord of the Rings/Hobbit tournament held each year by a good friend of mine. This year would be the ninth time he organizes this event and for a few years now he has invited me to come over. And each time I was unable to participate. But 2018 will see a change in this routine we painstakingly created over these years! I will battle it out with 25 other contestants to see who will become the Lord of the Strategy of this year. (Just a quick heads-up; it will most definitely not be me.)

Startegy 2018 will be held on June 17th. Which gives me about two months to create a 600 points army from the moment I decided to join. This in itself will be a challenge since I am not the fastest army painter in the world, far from it. I have no illusions of getting far in the ratings of this tournament (ETC members will also be playing and I have never even played the ruleset) I do intend to bring along a very good-looking and Tolkien-worthy army. If there will be a best-painted-army thing I intend to give that a serious shot.

As said I have never played this ruleset before, but I am a collector of models. With my obsession for desert themed armies it might not come as a surprise I have collected some Harad models over the years. All of them on sprue, half build or even in blisters/boxes. But nothing painted. I have one of the mighty Mûmakil, several boxes of warriors, a box of Raiders on horseback and some other warrior-like models as Merchant Guard and Watchers of Kârna. More than enough to gather a 600 points worth army. For a moment I was tempted to bring the Mûmak, but the massive paint job and the fact that it would take up about half of the total army points made me give up that idea. I have a Ringwraith on Fellbeast laying around that I could convert in the Betrayer, but I bought this model second-hand somewhere along the line and I still need to strip it from it’s awful paint job. So it would be no monsters or big-ass models for me.

Strategy is based on gathering tournament points. By winning games you can get points, the amount of overwhelming victory will get you more points and such. But before a battle is fought you already have a chance to gather some points. When you bring an all painted and based army you get points. As well for bringing an army that is in concept with the Tolkien stories and turning in your army roster on time. Well, these should be the points I will focus on initially. So when I had decided on the army I immediately started prepping and basing them. I like to base my models with flock and stones before painting and once the models all had received their basing I spray painted them with a white base coat. 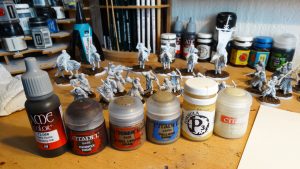 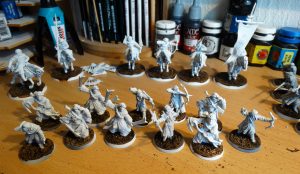 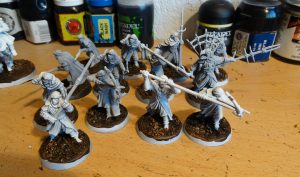 The bases are done as follows; first I apply a healthy layer of brown ink (in this case Smokey Ink from Game Color). This needs to dry for about a day to get the flock properly fixed again before dry brushing. Start too soon and you will brush most of the flock straight from the base again. The drybrush layers are done with Rhinox Hide (a thick coat), Steel Legion Drab, Tallarn Sand, P3 Moldey Ochre and Bleached Bone as highlight. A touch of Golden Yellow here and there finishes the sand colors. The bigger stones then get a heavy drybrush coat of Codex Grey, followed by a highlight of pure white. The base edge gets a normal paint coat of Steel Legion Drab. And with a few hours of solid work all bases are done. (And look better than with some regular flock added afterwards in my opinion.) 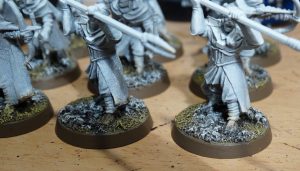 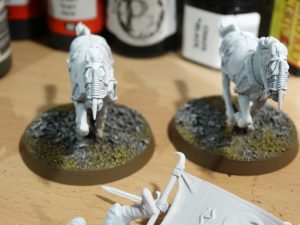 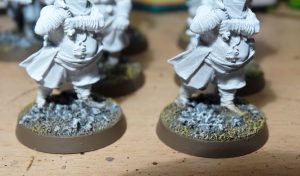 Next up was the skin of these fellows. I always work from the inside out, meaning that I will paint the skin first and then build up outwards with clothing and equipment. For the skin I used a Bronzed fFlesh base coat, followed by a Flesh Wash and drybrushed with Bronzed Flesh again. Next came layers of drybrushing with Dwarf Flesh and Elf Flesh, a highlight of Pallid Flesh and a Sepia wash (Game Ink) to finish it off.

By then it I had to stop painting them as an army and focus on individual models or groups of the same type. I started with the big bellied Abrakhân Merchant Guard. They would be different in color from the rest of the army. I want to paint my regular Haradrim in black and red hues, but these Guard models are from the richer parts of Harad and get more purple and blue garments. The final result is acceptable, but I must admit I am somewhat underwhelmed by the quality of the sculpts (of all the Harad models). 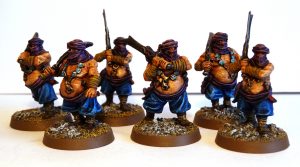 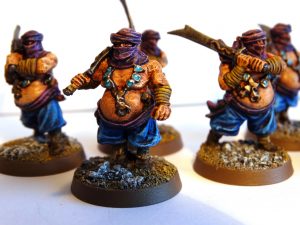 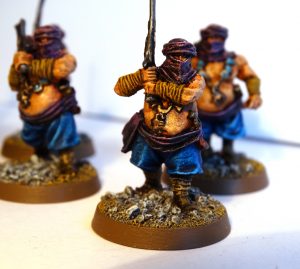 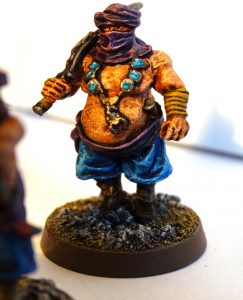 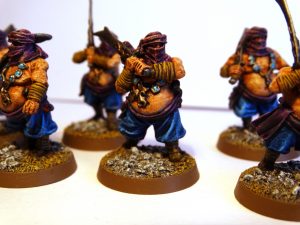 The warband with the Merchant Guard also has some warriors with the Abrakhân upgrade. So these also got more blue tones. 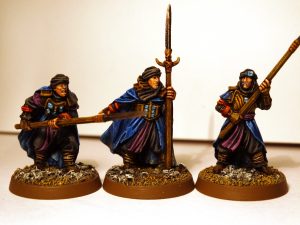 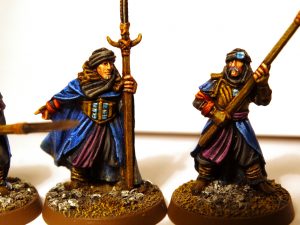 While reading the Hobbit rulebook I was pleased to notice a lot of these rules are the same as the Legend of the High Seas rules I have played a lot in the last two years. I had heard this was the case, but was very happy to see that I did not need to learn all the basics, just some extra rules before turning to the rules connected to the Haradrim themselves. (The Haradrim might not be the best army out there, but they do get to have more archers in their armies then others – yah!).

Still, some practice beforehand might not be a bad idea, so this Friday I will take the field against some club members with Minas Tirith and Dwarfs just to get a feel for the game. Sadly my models will not all be painted before then, but I will do my best to finish some Watchers of Karnâ…

The road to Strategy will go on and on, from the door where it began…